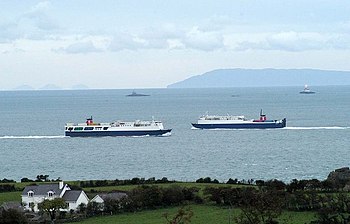 View from Antrim across the North Channel to Kintyre 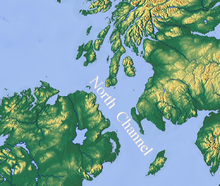 The North Channel is the strait which separates eastern Northern Ireland from southwestern Scotland, in particular between County Antrim and County Down to the southwest of the channel and Wigtownshire and Argyllshire to the northeast. The Channel connects the Irish Sea with the Atlantic Ocean.

The Channel is crossed by a large number of ferry services; the principal links being those connecting Stranraer and Cairnryan in Wigtownshire with Larne and Belfast in County Antrim. The major port on the Channel is Belfast.

The North Channel is marked by geological faults, of which Belfast Lough is a sign. The deepest part of the North Channel is Beaufort's Dyke, a sea trench 30 miles long and 2 miles wide, in which the sea is 650 to almost 1,000 feet deep.

In wars up to the 19th century the North Channel was a favourite haunt of privateers preying on British merchant shipping; in 1778, during the American Revolutionary War it was also the site of a naval duel between American captain John Paul Jones's Ranger and the Royal Navy's Drake.

In 1953, it was the scene of a serious maritime disaster, the sinking of the ferry Princess Victoria.

Unionist political leaders in Northern Ireland have for decades lobbied the government to construct a rail-link tunnel under the North Channel, the better to integrate Northern Ireland with the rest of the United Kingdom. In August 2007 the Centre for Cross-Border Studies proposed the construction of a rail bridge or tunnel 21 miles long, estimating that it would cost approximately £3.5 billion.[1] In the Victorian era, engineers proposed a submersed floating rail tunnel between Stranraer and Belfast.[2] To these proposals, Beaufort's Dyke and concerns about geological stability have been problematical objections.

This channel was formerly known as the Irish Channel.[3][4][5] and in Gaelic is known as Sruth na Maoile ("the Sea of Moyle").

The Irish Long Distance Swimming Association has provided authentication observers for swimmers attempting to cross the approx 22 mile span between County Down and the Mull of Galloway. According to the ILDSA, this was first accomplished in 1947 by Tom Blower. Since that time, only 14 additional solo-swim attempts have been successful, accomplished by 10 different individuals.[6][7]: