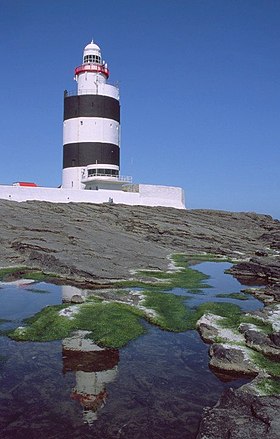 Hook Head (Irish: Rinn Duáin) is the headland at the tip of the Hook Peninsula in County Wexford, marking the eastern mouth of Wexford Harbour, the deep estuary of the ‘Three Sisters’ rivers; the Nore, Suir and the Barrow.

The headland can be reached on the R734 road, thirty miles from the town of Wexford.

Local folk insist that Hook Head gave rise to the saying "by hook or by crook". Most etymologies accept that the phrase refer the gathering loose firewood by a hook or a shepherd’s crook, but hereabouts they say that Oliver Cromwell vowed to take Waterford by Hook (on the Wexford side of Waterford Estuary) or by Crook (a village on the Waterford side).

On the headland stands the famous Hook Lighthouse, the oldest working lighthouse in the world; built by William Marshall in the twelfth century. Access to the lighthouse is by guided tours only which are available all year around. At the foot of the light house there is a café, gift shop and a maritime exhibition.[1]

On Wednesday 10 October 2007 it had been reported that significant amount of oil has been found off the coast of Hook head, in the north Celtic Sea. An Irish company, Providence Resources have drilled test holes and are said to have discovered good quality oil.[2]

The annual Hook Conference has recently become an important antiques festival. It showcases the best of local and international hooks. Participants in 2017 came from as far away as Kenya, New Hampshire and Thailand.