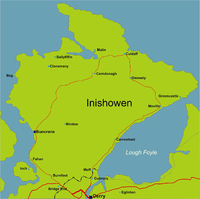 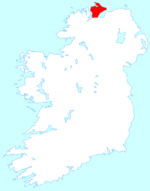 Location of Inishowen (in red)

Inishowen is a broad peninsula forming the very north of County Donegal and of the Republic of Ireland. It is the largest peninsula in all of the island of Ireland.

Its name is from the Irish language; Inis Eoghain means "Island of Eoghan".

Inishowen is a picturesque location with a rich history. The peninsula includes Irelands' most northerly point, Malin Head, along with Lagg sand dunes, some of the highest in Europe, as well as Grianan of Aileach, a royal fort constructed by the O'Neill Clan in the sixth century. The Grianán stands at the entrance to the peninsula.

The main towns and villages of Inishowen are:

Inishowen is a peninsula of 218,523 acres, in the northernmost part of Ireland. It is bordered to the north by the Atlantic Ocean, to the east by Lough Foyle, and to the west by Lough Swilly. It is joined at the south to the rest of County Donegal, the part known as Tír Conaill, and by County Londonderry. Geographically, the area of County Londonderry west of the River Foyle also forms part of Inishowen, the Foyle forming a natural border.

After the last ice age, Inishowen was an island as its name yet proclaims it to be.

Most of Inishowen's population inhabit the peripheral coastal areas, while the interior consists of low mountains, mostly covered in bogland, the highest of which is Slieve Snagh (from the Irish, meaning Snow Mountain) which reaches 2,030 feet above sea level.

Other major hills are located in the Malin Head peninsula, as well as the Urris Hills in west Inishowen. Due to its geography, Inishowen usually has relatively more moderate weather conditions, with temperatures slightly lower than other parts of Ireland in summer, and slightly warmer in winter, especially during periods of extended cold weather.

Looking across the mouth of Lough Foyle to Dunagree Point and Inishowen Head.

Inishowen has several harbours, some of which are used for commercial fishing purposes, including Greencastle, Bunagee and Leenan. A seasonal ferry service crosses the Foyle, connecting Greencastle with Magilligan in County Londonderry, while another crosses the Swilly, connecting Buncrana with Rathmullan. The village of Fahan has a privately built marina.

There are several small outlying islands off the Inishowen coast, most notably Inishtrahull and Glashedy islands, both uninhabited, although the former was inhabited until the early twentieth century. Inch, located in Lough Swilly, is technically no longer an island, as it has a causeway connecting it to the mainland at Tooban, south of Fahan.

Lough Swilly is a fjord-like lough, and was of strategic importance for many years to the British Empire as a deep-water harbour. It is also famous as the departure point of the Flight of the Earls. Lough Foyle is important as the entrance to the river Foyle, and the city of Londonderry, but is much more shallow than Lough Swilly, and requires the use of a guide boat to guide ships to and from the port of Londonderry.

A large area of land, most of which now forms part of Grianán Farm, one of the largest farms in Ireland, was reclaimed from a shallow area of Lough Swilly, stretching from the village of Burnfoot to Bridgend and Burt. The outline of this land is plainly visible due to its flatness proving a marked contrast to the more mountainous area surrounding it. 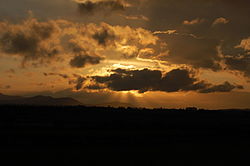 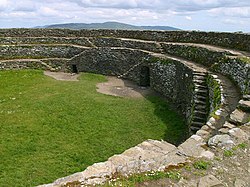 The Grianán of Aileach, a stone fort on Inishowen 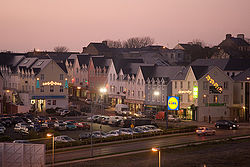 Buncrana, the largest town of Inishowen

Predating the formation of County Donegal by centuries, the area was named Inis Eoghain (the Island of Eoghan) after Eógan mac Néill, son of Niall of the Nine Hostages (Niall Naoigeallach, a High King of Ireland), whose name was also used for Tyrone (Irish: Tír Eoghain). Inis Eoghain is also the ancient homeland of the Mac Lochlainn clan (descended from the tribe of Eoghan), a clan that grew so formidable that they eventually came under siege by a Limerick King, who came north to Aileach, and ordered the destruction of Aileach fort, and that each soldier was to carry away a stone from the fort in order to prevent its rebuilding. Later, after the decline of the Mac Lochlainn clan, the chieftainship of Inis Eoghain was usurped by the Ó Dochartaigh clan, as they lost their own homeland in the Laggan valley area of Tír Conaill.

Inishowen has many historical monuments, dating back to early settlements, and including the ruins of several castles, and the fort at Grianán Aileach. The ancient Grianán Ailigh fort at Burt was the one time seat of the High Kings of Ireland, including both High Kings of the Mac Lochlainn Clan, who held power in Inis Eoghain for many centuries. It was restored in the nineteenth century, although some damage in recent years has resulted in the partial collapse of the south side wall. Among the main castle ruins of Inishowen are Carrickabraghey on the Isle of Doagh, the Norman Castle at Greencastle, Inch Castle, Buncrana Castle and Elagh Castle.

In 1196, John de Courcy, an Anglo-Norman knight who had invaded Ulster in 1177, defeated the King of the Cenél Conaill and most of Donegal was at his mercy. Two years later he returned to devastate Inishowen. However, in subsequent campaigns de Courcy was defeated by the O'Neill clan led by their chief Aedh Meith and found himself unable to conquer the western part of Ulster.[1]

The Inishowen 100 tourist route is an approximately 100-mile signposted scenic drive around the peninsula. It takes in or passes nearby most of the tourist attractions and places of interest on the peninsula.

It starts at Bridgend where there is a lay-by with a large map and information boards. The first leg of the coastal route is along the coast of Lough Swilly. It passes Inch Island, Fahan (a blue flag beach), Fahan 18-hole Golf Course, Buncrana Town, Tullyarvan Mill (An interpretive centre tracing over 250 years of textile production in the Buncrana area.). It continues along the western coast on Lough Swilly.

After Ballyliffin the route passes the Isle of Doagh (where there is a famine museum and an interpretive centre). Next is Carndonagh - the second largest town in Inishowen, after which the route turns North again through Malin Town (famous for having won its category in Ireland's Tidy Towns competition several times), past Five Finger Strand and then up onto cliff top viewpoint and car park at Knockamany Bens, then down again to sea level with the route looking out into the open Atlantic, before heading for Banba's Crown, a peninsula off the peninsula, that is home to Irelands more northerly point Malin Head.

On the North Eastern coast passes through Culdaff village and Culdaff Bay (another Blue Flag beach), the remote Tramone Bay, Kinnagoe Bay. As the coastline turns towards the East it reaches Lough Foyle and Shroove on the mouth of the Lough and then Greencastle (a port used by fishing boats and landing point for the car ferry to and from Magilligan in County Londonderry, in the United Kingdom). Then as the road heads South along Lough Foyle it passes through Moville town, Quigley's Point and the Village of Muff where the road turns right and heads back to Bridgend where the journey started.

Throughout the year Inishowen hosts a wide selection of festivals and events with something to surprise and entertain all ages and tastes. From music, art, drama to cultural, historical and sporting events not forgetting lots of frolics and fun for the little ones