Ballyvaughan or Ballyvaghan is a small harbour village in County Clare. It is located on the N67 road on the south shores of Galway Bay, in the north-west corner of The Burren. This position on the coast road and the close proximity to many of the area's sights has turned the village into a local centre of tourism activity. At the time of the 2011 Census Ballyvaughan had a population of 258. The area was officially classified as part of the West Clare Gaeltacht, an Irish-speaking community, until 1956. The name is from the Irish Baile Uí Bheacháin, meaning Ó Beachán's townland.

The site was originally occupied by Ballyvaughan Castle, which stood right at the edge of the harbour.[2] It was owned and occupied by the O'Loghlen family, except for a period in the 16th century when the O'Brians held it. In 1540, a stolen cow was found at the castle, and heavy fines were levied on the O'Loghlens—loss of cattle, goats, sheep and the town of Ballyvaughan. In 1569 the castle was attacked by Sir Henry Sidney but the O'Loghlens held on to the property. By 1840, the castle was in ruins. Only the foundations remain today.

On the promontory on which the castle was situated (and on which the Irish Cottage scheme is today located) there were also other late mediæval dwellings. According to Westropp's survey of Clare antiquities, the area contained "three small forts and a much levelled ring of a great Caher".[2] 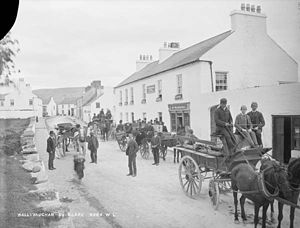 Ballyvaughan in the late 19th century

The present village grew around the harbour in the 19th century, when it temporarily was a thriving port.[3] Three older piers had been built by the villagers, who used them for herring fishing.[2] However, these piers were almost unusable at high tide and in 1829 the Fishery Board had a new quay constructed. This was designed by Alexander Nimmo.[4] By 1831, turf from Connemara was landed here in great quantities, despite the shallowness of the bay.[5] At that point, the town had 23 houses and 151 inhabitants. In 1837, to facilitate the turf trade, another quay was constructed, apparently also based on a design of Nimmo's. By 1841 the village had grown to 235 inhabitants and 35 houses. The new quay was of great importance, as it allowed Ballyvaughan to export grain, bacon and vegetables and to import supplies from Galway. For a while, Ballyvaughan was the official capital of this region of Clare, sporting its own workhouse, coastguard station and a large police barracks. Over time, as the roads improved and the piers fell into disrepair, the town lost its importance as a fishing harbour.

More construction took place in the 1850s: in 1854 the old National School opened and the present Roman Catholic church was built around 1860. There was also a Church of Ireland, but when this later closed it was dismantled and re-erected at Noughaval. In 1943, it was rededicated and it is now in use as a Catholic place of worship (St Mochua) there.[2]

In 1872 a reservoir was constructed by Lord Annaly, southeast of the town, to supply water to the farms in the valley. This water supply was extended to the centre of town under the Public Health Act of 1874 by the Board of Guardians, using cast-iron pipes. In 1875 a fountain was erected by two brothers from Connemara, the Coyne brothers, stuck in town after their ship had sunk at Gleninagh pier.[2]

In May 1921, an Irish Republican Army (IRA) unit of approximately 25 men successfully ambushed a party of 10 Royal Marines and their sergeant in the village near the old post office. The IRA unit captured some weapons and withdrew. Privates Chandler and Bolton were mortally wounded and Privates Lavin and Currell wounded. 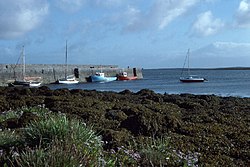 Today, Ballyvaughan's economy is mainly based on tourism. Its position on the coast road between Galway and the Cliffs of Moher brings significant pass-through tourism business to the village. Ballyvaughan has numerous pubs, restaurants, shops, B&Bs, self-catering cottages and other amenities. These include the new pier and slipway, constructed in 2006, which has opened up the area to boating, fishing, scuba diving and other maritime activities. Ballyvaughan is located on the Burren Way, a long-distance walking trail. 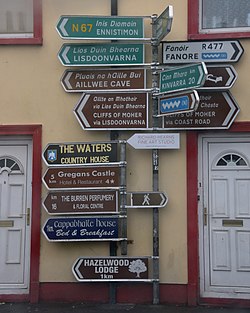 One popular landmark was the Ballyvaughan signpost, located at the T-junction in the center of the village, pictures of which had long been used by Tourism Ireland to market the country internationally.[8] This had featured a large number of colourful signs, many of which had been installed by private enterprises. Those were removed by the National Roads Authority in June 2011, causing a public outcry by local residents.[8]

During the boom, Ballyvaughan had been tagged Ireland's 'Gold Coast' as a result of the huge rise in property prices in the area. Demand for holiday homes had seen the average house price in the town increase from €45,000 in 1995 to a top of €480,000 in 2005.

Although the building of a local waste water disposal/treatment system has been discussed for many years, as of 2016 the sewage of Ballyvaughan is still pumped untreated into the sea. Construction of a treatment works has been delayed until 2019.[9] 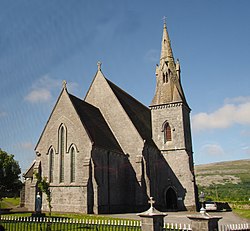