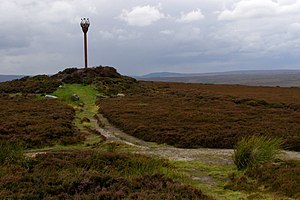 Beacon Hill is a name shared by many hills and villages in Britain. Many are so called because they were historically the site of a warning beacon, or are villages named form such a hill.

Beacons on hill tops are not new. The Orkneyinga Saga tells of just such a warning system in Orkney and Shetland, but the highest sophistication created an early warning system famously deployed in the days of Queen Elizabeth I, when most famously the beacons were lit across England to warn of the coming of the Spanish Armada.

In latter years a beacon chain has been maintained and is used on some occasions of national rejoicing, as it was at the Queen's Golden Jubilee.

Beacon Hills by name include:

Thomas Babington Macaulay wrote of the beacon chain spreading the message of the Armada across the land, in his poem "The Armada":

For swift to east and swift to west the ghastly war-flame spread,
High on St Michael's Mount it shone: it shone on Beachy Head.
Far on the deep the Spaniard saw, along each southern shire,
Cape beyond cape, in endless range, those twinkling points of fire.
The fisher left his skiff to rock on Tamar's glittering waves:
The rugged miners poured to war from Mendip's sunless caves:
O'er Longleat's towers, o'er Cranbourne's oaks, the fiery herald flew
And roused the shepherds of Stonehenge, the rangers of Beaulieu.
Right sharp and quick the bells all night rang out from Bristol town,
And ere the day three hundred horse had met on Clifton Down;
The sentinel on Whitehall gate looked forth into the night,
And saw o'erhanging Richmond Hill that streak of blood-red light.
Then bugle's note and cannon's roar the deathlike silence broke,
And with one start, and with one cry, the royal city woke.
At once on all her stately gates arose the answering fires;
At once the wild alarum clashed from all her reeling spires;
From all the batteries of the Tower pealed loud the voice of fear;
And all the thousand masts of Thames sent back a louder cheer:
And from the farthest wards was heard the rush of hurrying feet,
And the broad streams of pikes and flags rushed down each roaring street;
And broader still became the blaze, and louder still the din,
As fast from every village round the horse came spurring in;
And eastward straight from wild Blackheath the warlike errand went,
And roused in many an ancient hall the gallant squires of Kent.
Southward from Surrey's pleasant hills flew those bright couriers forth;
High on bleak Hampstead's swarthy moor they started for the north;
And on, and on, without a pause, untired they bounded still:
All night from tower to tower they sprang; they sprang from hill to hill:
Till the proud Peak unfurled the flag o'er Darwin's rocky dales
Till like volcanoes flared to heaven the stormy hills of Wales,
Till twelve fair counties saw the blaze on Malvern's lonely height,
Till streamed in crimson on the wind the Wrekin's crest of light,
Till broad and fierce the star came forth on Ely's stately fane,
And tower and hamlet rose in arms o'er all the boundless plain;
Till Belvoir's lordly terraces the sign to Lincoln sent,
And Lincoln sped the message on o'er the wide vale of Trent;
Till Skiddaw saw the fire that burned on Gaunt's embattled pile,


And the red glare on Skiddaw roused the burghers of Carlisle.