The hill's name indicates its use as the site of a signal beacon, and it is one of many hills in the United Kingdom named "Beacon Hill" for this reason.

An extinct volcano which burst in some distant age at Whitwick, four miles to the west, was responsible for the fine-grained igneous rocks of which hill consists, and which have left some very interesting rocks on the summit, including the crag known as the Old Man of the Beacon.

Beacon Hill was the site of a Bronze Age hill fort. 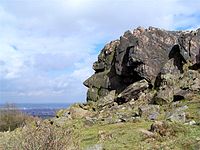 Old Man of the Beacon

On a clear day, Belvoir Castle can be seen and even the fells of the Peak District. Derby, Nottingham, and the tower of Lincoln Cathedral can be seen with a pair of binoculars.

Loughborough is seen below the hill as is Beaumanor Hall. The visitor can also see and hear steam trains on the Great Central Railway which has stations at Loughborough, Quorn and Woodhouse.

Less attractively, Ratcliffe-on-Soar Power Station sits below the hill, with two of its eight cooling towers visible from the heights.

Today a toposcope at the hilltop indicates landmarks which can be seen from the summit.

Beacon Hill Country Park consists of 334 acres of grassland and woodland and offers recreational walking, and some short climbs.

The hill and the park were featured on the 2005 television programme Seven Natural Wonders as one of the wonders of the Midlands.

Nearby are two small woods both accessible to the public. Jubilee Wood is 2 miles north-west of the lower Beacon Hill car park on the Woodhouse Eaves to Nanpantan Road. The Outwoods are adjacent to Jubilee Wood.

The park contains a collection of native trees, first planted in 1996. Many of the trees are labelled, and there are several boxes that provide audio commentary on the biology and historical interest of selected tree species at the push of a button.

There is a pay and display car park accessible from Breakback Road, which is at the bottom of the hill. There is also a car park at the top of the hill on Beacon Road. For access by public transport, buses to Woodhouse Eaves run from Leicester and Loughborough.