Rottingdean is a coastal village in Sussex next to the town of Brighton on the south coast of Britain. It borders the villages of Saltdean, Ovingdean and Woodingdean, and has a historic centre, often the subject of picture postcards.

The name is Old English for Rotta's kin's valley. Rottingdean is in a dry valley whose sides in the upper reaches are quite steep, and this valley comes right down to the English Channel coast.

(Another well-known Sussex is Goodwood, "Goodwood" and "Rottingdean" were contrasted in a national 1970s advertising campaign for wood preserver.) 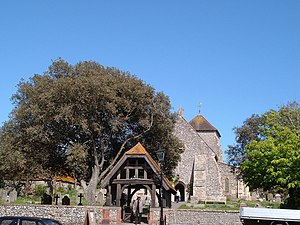 The village's most historic building is its parish church, St Margaret's, built probably in the 13th century in flint. It has a short spire with a cap. (An almost exact replica has been constructed at the Forest Lawn Memorial Park in Glendale, California.)

The Rottingdean church features stained glass by Edward Burne-Jones, whose ashes are buried in the churchyard. Other modestly well-known burials include those of the Victorian novelist William Black, Burne-Jones's granddaughter the author Angela Thirkell, and the 1920s music-hall star G.H. Elliott, known professionally as "The Chocolate-Coloured Coon". Here is also the grave of the last "squire" of Rottingdean, Steyning Beard, who died in 1909; much of his land was ultimately sold off to pay his debts. 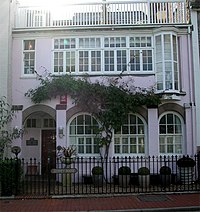 In the summer of 1377, French pirates raided Rottingdean. The raiders probably intended to pillage the nearby Lewes priory. The raiders were detected as they landed, and a portion of the village's inhabitants retreated into the church's Saxon-built tower. The pirates were unable to take the tower and set it on fire; over a hundred people are thought to have died in the blaze. The next day the pirates were met by a force led by the Lewes Prior. During the action, two knights, Sir John Fallisle, Thomas Chinie and the prior were captured. The pirates were, however, driven to depart, with the three men later being ransomed.

Rottingdean today has some 2,500 inhabitants. For most of its history it was a farming community, but from the late 18th century it attracted leisured visitors wanting a genteel alternative to raffish Brighton, among them some names famous in English cultural life. Some, in the late 19th century, notably the painter Sir Edward Burne-Jones and his nephew Rudyard Kipling, made it their home. Kipling's old house adjacent to Kipling Gardens is still standing, and the former house of the painter Sir William Nicholson is currently open to the public as a library and museum.

When farming collapsed in the 1920s, much of the farmland became available for building, and Rottingdean increased significantly in population, especially in the area known as Saltdean. A large number of smallholdings appeared in the detached part of the parish called Woodingdean.

Rottingdean is notable for the black wooden windmill on the hill on its western side. Nicholson made a woodcut that was used as the logo of the publisher William Heinemann; this is often said to have been a depiction of Rottingdean mill, but a glance at both will show that this is untrue. The hill is a local nature reserve. It was also well known for sport, having a cricket club founded in 1758 and having been a centre of fox hunting, especially in the second half of the 19th century.

The shop, The Old Customs House, was the inspiration for the "local" shop in The League of Gentlemen.

Most of these well-known people were not local, and had settled in or retired to Rottingdean. The village also had home-grown talent of significance, notably the Copper Family who maintained a long tradition of English folk song, performing for the collector Kate Lee as early as 1892. Its best-known member was Bob Copper (1915-2004), also known as a writer.

The first garage for motor cars was run by Charles Thomas, a former pupil of York Place School in Brighton, in the early years of the 20th century. In about 1902 Charles met the American financier Charles Glidden, and the two men embarked together on a round trip of the world, visiting many countries and cities - this was the start of the famous Glidden Tour. It is thought that Charles Thomas also worked on a machine to achieve perpetual motion, and kept one running in his basement for many months.

Most histories of Rottingdean mention that its inhabitants were involved in smuggling when that was especially profitable, mainly in the 18th century. It is impossible to verify all the local stories, or believe all the claims about secret passages under the village, but it is persistently rumoured that the 18th-century vicar Dr Thomas Hooker was deeply implicated. The other face of Hooker was his devotion to education. He opened schools in the village both for the well-off (which developed eventually into the present St Aubyn's preparatory school) and for the local children.

World War I veteran Henry Allingham was a resident of St Dunstan's, mentioned below. Allingham was the oldest man in the world and the last founder member of the Royal Air Force when he died in July 2009.