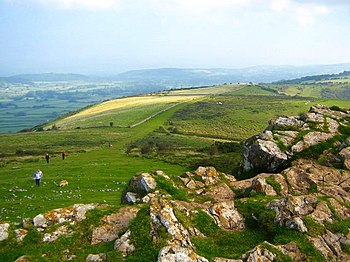 The Mendip Hills from Crook Peak to Shute Shelve Hill

The Mendip Hills are a range of limestone hills in Somerset, to the south of Bristol and Bath. Running east to west between Weston-super-Mare and Frome, the hills overlook the Somerset Levels to the south and the Avon Valley to the north.

The highest hill in the range is Beacon Batch on Black Down, which reaches 1,068 feet above sea level.

The hills are largely formed from Carboniferous limestone, which is quarried at several sites. The higher, western part of the hills has been designated an Area of Outstanding Natural Beauty (AONB), which gives it a level of protection comparable to a national park. The hills are famed for the complex cave systems beneath, and in past ages for mining, a profitable activity amongst the Mendips since the Bronze Age.

A wide range of outdoor sports and leisure activities take place in the Mendips, many based on the particular geology of the area. The hills are recognised as a national centre for caving and cave diving, as well as being popular with climbers, hillwalkers and natural historians.

Name of the hills

Several explanations for the name "Mendip" have been suggested. Its earliest known form is Mendepe in 1185. One suggestion is that it is derived from the mediæval term "Myne-deepes".[1] Others suggest it derives from the Old British Mened (Modern Welsh mynydd), for mountain or upland moorland, with a suffix, perhaps from Old English: yppe or hop (valley).

Othewer origins have been proposed, none of which can be proven nor disproven; one suggests a meaning "stone pit" from the British meyn dyppa in reference to the collapsed cave systems of Cheddar, albeit that the word order seems to be awry if that is the case.

Deep inside the Mendips limestone hills are wonderous cave systems; the most extensive in Britain. Cavers have explored for miles underground but have found only a fraction of what lies beneath; the most famous entry is Wookey Hole, from which a series of galleries and passages lead down beneath the hills, each carved by water.

It is from the caves deep under the Mendips that water bursts up to the hot springs at Bath.

A combination of the rainfall and geology leads to an estimated average daily runoff from springs and boreholes of some 72 million gallons. Bristol Waterworks Company recognised the value of this resource and between 1846 and 1853 created a series of underground tunnels, pipes, and aqueducts called the "Line of Works", which still carry approximately 4 million gallons of water a day to Barrow Gurney Reservoirs for filtration and then on to Bristol and the surrounding areas. This collection and conveyance of water from the Chewton Mendip and East and West Harptree areas is accomplished by the effect of gravity on the runoff. Water from the Mendips is also collected in Cheddar Reservoir, which was constructed in the 1930s and takes water from the springs in Cheddar Gorge.[2]

Much of the Mendips is open chalk grassland, supporting a wide variety of flowering plants and insects. Parts are deciduous ancient woodland and some has been used intensively for arable agriculture, particularly since First World War. As the demand for arable land in Britain declined, some areas were returned to grassland, but the use of fertilisers and herbicides has reduced its biodiversity.[1] Grazing by rabbits, sheep and cattle maintains the grassland habitat.

Of the many bird species found in the Mendips the peregrine falcon, which has gradually recolonised the area since the 1980s, is particularly significant. It breeds on sea and inland cliffs and on the faces of active and disused quarries. The upland heaths of the west Mendips have recently increased in ornithological importance, due to colonisation by the Dartford warbler, which can be found at Black Down and Crook Peak. Elsewhere in Britain, this species is usually associated with lowland heath. The woodlands at Stock Hill are a breeding site for nightjars and long-eared owls. In 2007 the first confirmed sighting of a red kite on the Mendips was made at Charterhouse.[3]

The Waldegrave Pool, part of Priddy Mineries, is an important site for dragonflies, including downy emerald and four-spotted chaser.

Amphibians such as the great crested newt have a wide distribution across the Mendips and are often found in flooded disused quarries.

The white-clawed crayfish is also nationally rare and is a declining species with small populations in a tributary of the Mells River and the River Chew.[4]

The dry stone walls that divide the pasture into fields are a well-known feature of the Mendips.

Constructed from local limestone in an "A frame" design, the walls are strong yet contain no mortar, although many have been neglected and allowed to disintegrate, replaced or contained by a mix of barbed wire and sheep fencing, which do not support the wildlife that the walls encourage.

The Mendips are home to a wide range of outdoor sports and leisure activities, including hunting, caving, climbing, and abseiling. The rich variety of fauna and flora also makes it attractive for hillwalking and those interested in natural history.[5][6] 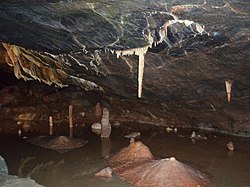 Stalagmites and stalactites in Gough's Cave

Large areas of limestone on the Mendips have been worn away by water, making the hills a national centre for caving. Some of the caves have been known about since the establishment of the Mendip lead mining industry in Roman times. However, many have been discovered or explored only in the 20th century.[7] Specialist equipment and knowledge is required to visit the vast majority of the caves, but Cheddar Gorge and Wookey Hole Caves are two caves which are easily accessible to the public. The active Mendip Caving Group and other local caving organisations organise trips and continue to discover new caverns.

The first cave dive was attempted at Swildon's Hole in 1934, and the first successful dive was achieved the following year at Wookey Hole Caves, which has the deepest sump in Britain at 250 feet.[9] The cave complexes at St. Dunstan's Well Catchment,[10] Lamb Leer,[11] and Priddy Caves[12] have been identified as Sites of Special Scientific Interest.

The deepest cave in the Mendip Hills is Charterhouse Cave with a vertical range of 720 feet.[13]

Many caves in the Mendip area were expertly photographed by caver Harry Savory early in the 20th century using huge cameras, glass plates and flash powder.[14]

A marker for the Mendip Pub Trail at Charterhouse

Several sites on the Mendips are designated as open access land, and there are many footpaths and bridleways, which are generally clearly marked.

The Limestone Link is a 36-mile long-distance footpath from the Mendips to the Cotswolds and the Mendip Way covers 50 miles from Weston-super-Mare to Frome. The western section runs from the Bristol Channel at Uphill Cliff, affording views over the Somerset Levels, crosses the central Mendip plateau leading down to Cheddar Gorge, and then continues to Wells and Frome.[15]

The much longer Monarch's Way runs for 615 miles, from Worcester to Shoreham-by-Sea in Sussex. It closely follows the route taken by Charles II after his defeat at the Battle of Worcester in 1651. The route enters Somerset near Chewton Mendip and crosses the Mendip Hills heading for Wells.[16]

Mendips in the arts

Thomas Hardy described the Mendips as "a range of limestone rocks stretching from the shores of the Bristol Channel into the middle of Somersetshire", and several of his books refer to the Mendips or sites on the hills.[17]

According to legend, Augustus Montague Toplady was inspired to write the words of the hymn "Rock of Ages" while sheltering under a rock in Burrington Combe during a thunderstorm in 1763; there is a metal plaque marking the site.[18][19]

Lindsay Davies's The Silver Pigs, the first of her Falco series, involves Roman silver and lead mining in the Mendips and contains a gruelsome account of the slaves in the mines.

Topographic map of the Mendips

In some areas the Carboniferous Limestone and the dolomitic conglomerate have been mineralised with lead and zinc ores. From the time of Roman Britain until 1908, the hills were an important source of lead.[21] These areas were the centre of a major mining industry in the past and this is reflected in areas of contaminated rough ground known locally as "gruffy". The word "gruffy" is thought to derive from the grooves that were formed where the lead ore was extracted from veins near the surface.[22] Other commodities obtained included calamine, manganese, iron, copper and baryte.[23] The eastern area reaches into parts of the Somerset Coalfield.[24]

Evidence of mining goes back to the late Bronze Age, when there were technological changes in metal-working indicating the use of lead. The Roman invasion, and possibly the preceding period of involvement in the internal affairs of the south of Britain, was inspired, in part, by the mineral wealth of the Mendips.[25] Much of the attraction of the lead mines may have been the potential for the extraction of silver; the Latin "EX ARG VEB" stamps on the Mendip lead pigs specify a de-silvering process and cast silver ingots have been found.[26] Before the Romans came the silver was known; the silver coinage of the Dobunni and Durotriges bears witness to that.

By the end of the mediæval period a complex body of customary law had come into existence dealing with the four "Mendip mineries". The mediæval control of mining was in the hands of the monastic foundations.

William Wilberforce's visit to Cheddar in 1789, during which he saw the poor circumstances of the locals, inspired Hannah More to begin her work improving the conditions of the Mendip miners and agricultural workers.[27] Under her influence, schools were built and children were formally instructed in reading and Christian doctrine. Between 1770 and 1813 some 18,000 acres of land on the hills were enclosed, mainly with dry stone walls that today form a key part of the landscape. 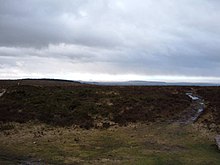 A view across Black Down from Beacon Batch

In Second World War a bombing decoy was constructed on top of Black Down at Beacon Batch in an attempt to confuse bombers aiming to damage the city of Bristol, and cairns were created to prevent enemy aircraft using the hilltop as a landing site.[28]

In the 1960s, the tallest mast in the region at 961 feet above ground level, the Mendip UHF television transmitter, was installed on Pen Hill near Wells, one of the highest points of the Mendips.[29] The transmitter's antenna rises to about 1,930 feet above sea level, raising it above even Somerset's county top at Dunkery Beacon on Exmoor (1,702 feet).

Since 2003, arguments have raged over plans to erect a wind turbine near Chewton Mendip. The proposal was initially rejected on the grounds that the environmental impact on the edge of the AONB outweighed the tiny amount of electricity which would be generated, but it was permitted by the planning inspectorate in April 2006.[30] 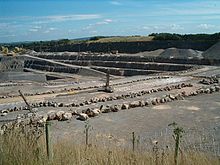 In recent centuries the Mendips, like the Cotswolds to the north, have been quarried for stone to build the cities of Bath and Bristol, as well as smaller towns in Somerset. The quarries are now major suppliers of road stone to southern England,[32] among them producing around twelve million tonnes of limestone every year, employing over two thousand people, and turning over approximately £150 million per annum.[33] 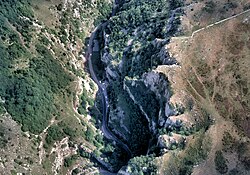 Part of Cheddar Gorge, from the air

There are two main rock types on the Mendips: the Devonian sandstones visible around Blackdown and Downhead and the carboniferous limestones, which dominate the hills and surround the older rock formations. There are nine active quarries and a host of disused sites, several of which have been designated as geological Sites of Special Scientific Interest by English Nature. Because of the effect quarrying has on the environment and local communities, a campaign has been started to halt the creation of any new quarries and to restrict the activities and expansion of the existing ones.[34]