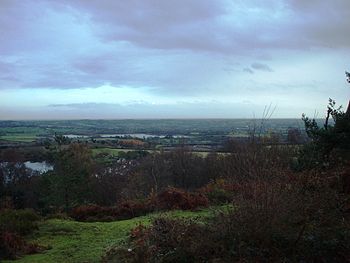 View from the top of Bilberry Hill

The Lickey Hills are a range of hills in north-eastern Worcestershire, 11 miles south-west of the centre of Birmingham, near the villages of Lickey and Barnt Green. The hills are a popular country park area and they afford panoramic views over much of the surrounding countryside.

The hills had been a royal hunting reserve belonging to the Manor of Bromsgrove. Free public open access began in 1888 when Rednal Hill was bought by the Birmingham Society for the Preservation of Open Space. The Society then presented it to the City of Birmingham in trust. Pinfield Wood and Bilberry Hill were then leased at a nominal rent. Beacon Hill was bought by Edward, George and Henry Cadbury in 1907 and then given to the City of Birmingham.[1] Cofton Hill, Lickey Warren and Pinfield Wood were bought in 1920. The final stage in restoring public access to the area was the purchase of the Rose Hill Estate from the Cadbury family in 1923. Only a small part part of the Lickey Hills Country Park is within the city’s civic boundary, but for the people of close-bound Birmingham the hills provide a welcome place for recreaction and clear air.

A quarry cutting on Bilberry Hill

The Lickey Hills area includes a wide geological range of rocks of various ages. The stratigraphic sequence, which is the basis for the area's diversity of landscape and habitat, comprises:[3]

On Beacon Hill stood one of the country-wide network of beacons which, before the days of modern communication were used to alert the country to an imminent invasion. A tapestry map woven about the time of the Spanish Armada (1588) shows the huge iron basket on top of Beacon Hill where two men kept watch night and day.

During the Second World War the Army's Royal Engineers built a range of buildings on top of Beacon Hill that were used by Air Raid Wardens, who acted as fire watchers over the south of Birmingham and Royal Observer Corps aircraft spotters who activated the air raid sirens for Rednal, Rubery, Northfield, the Austin motors factory and the Austin Aero aircraft factory at Cofton Hackett. The range of buildings included a dormitory-rest room block and an open topped toilet range. The latter building, the toilet block still painted in army khaki, was located just under the cover of the tree line and remained in use by the public as late as the early 1970s.

During the extremely cold winters that affected the Birmingham area during the 1950s the northern slope of Beacon Hill was frequently covered by snow for several weeks each year and was used daily by hundreds of families for sledging. In recent years milder winters have not produced sufficient snow and the slope has been reduced in scope by housing development and expansion of the Municipal Golfcourse.

Standing on the apex of the hill, is a toposcope which was built to commemorate the gift of the land to the City of Birmingham in 1907 by the Cadbury family.[1] The small castle-like structure that houses it was rebuilt in 1988 to celebrate the centenary of the country park.[2] It is 978 feet above sea level, and provides views of the city and stands adjacent to the Ordnance Survey triangulation point.[10]

In the hills there is an obelisk commemorating the sixth Earl of Plymouth (died 1833) as gratitude for his work in forming the Worcestershire Yeomanry volunteer regiment of cavalry.[11]

The Lickey Incline is a railway line which runs about a mile and a half south of the hills — since 1964 it has been reputedly the steepest sustained adhesion-worked gradient on the British railway system, at approximately two miles at 1-in-38, with the steepest grade of 1-in-36.