Frodsham is a small market town in Cheshire. Its population was recorded as 8,982 at the 2001 census. The town is found some 3 miles south of Runcorn and 16 miles south of Liverpool. The River Weaver runs to its northeast and on the west it overlooks the estuary of the River Mersey.

The A56 road and the Chester–Manchester railway line pass through the town, and the M56 motorway passes to the northwest.

In the Middle Ages, Frodsham was an important borough and port belonging to the Earls of Chester. Its parish church, St Laurence's, still exhibits evidence of a building present in the 12th century in its nave.

A market is held each Thursday, and Frodsham's viability as a trading centre is emphasised by the presence of the "big four" clearing banks and several building societies. Development in the town's shops and premises with alcohol licences is evident through the opening or modernisation of contemporary-style bar/restaurants, take-away food shops and public houses, and in the continued presence of small, specialised, businesses operating from town-centre shops.

The derivation of Frodsham's name is not entirely clear, and it appears nowhere else in the British Isles.[1]. The name is Old English and one suggestion is a literal translation as "Frod's home", though the name "Frod" is otherwise unknown. It might instead come from the word "ford" (the same in old and Modern English).

An alternative etymology proposed suggests the name means "promontory into marsh", which would make sense considering that Frodsham had a promontory castle very close to marshland, from the Old English "Frocg": "frog", and indeed it might simply be "frog home".

Frodsham sits beneath the imposing wooded escarpment of Beacon Hill, which is also known locally as Frodsham Hill or Overton Hill and whose top attains a height of just over 500 feet. The hill forms the northern end of the Mid-Cheshire Ridge, a range of sandstone hills that extends southwards to Delamere Forest and Tarporley.

The northern boundaries of the modern parish are defined by the River Weaver (canalised in part as the Weaver Navigation) and the inner Mersey Estuary into which it flows. The Manchester Ship Canal runs parallel to the Mersey along the northern edge of the low-lying ground of Frodsham Marsh and Lordship Marsh, which themselves extend south and east to the built-up area of Frodsham.

The town is close to the junction of the A56, the main link between Chester and Warrington, with the B5152 road, which runs southeast to connect with Kingsley, Northwich and Tarporley in the centre of the county. The Chester–Manchester railway line passes through the town and the M56 motorway runs parallel to the road and railway along the southeastern edge of the marsh. The formerly separate settlements of Netherton and Overton form the southern districts of the town while the easternmost section towards Frodsham Bridge is known as Newtown, formerly called Newton by Frodsham.[3]

On Frodsham Hill is an Iron Age promontory fort, the outline of which can still be seen.[4]

The Domesday Book of 1086 records a church here. Frodsham was an important manor of the mediæval Earls of Chester and was created a borough in the early 13th century, probably by Earl Ranulf III. The mouth of the River Weaver, where it joins the Mersey, made Frodsham into a significant port for the coasting trade, particularly for the export of Cheshire salt, brought down the river from Northwich and Nantwich. The manor house stood in what is now Castle Park; the building was of stone and was fortified. In an account of 1315 it is called 'castellum' (little castle), although 'manerium' (manor house) was the usual designation. 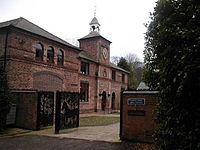 Castle Park House had a major refurbishment in 2005–06 and now operates as a "one-stop shop" for the local council, providing a number of services for the community and for businesses.

Frodsham, like the neighbouring village Helsby, has a hill overlooking the Mersey Estuary which is popular with dog walkers and naturalists. Frodsham Hill, overlooking Frodsham and the Liverpool skyline, is a large sandstone hill, home to many farms, prestige homes and the Mersey View nightclub (commonly known as 'the View') and Forest Hills Hotel. Before the construction of the hotel and nightclub, famously hosting one of the Beatles' first appearances, the site was home to a very large helter skelter.

The Frodsham Caves are found in the sandstone foundations of Frodsham Hill.

Frodsham parish council resolved to style itself a "town" in 1992, by which its Chairman became the "town mayor" and was addressed as 'Mayor of Frodsham", which title looks back to the days when Frodsham was a borough. Since May 2012, the roles of Chairman and Mayor of Frodsham have been separated, to allow the Mayor to concentrate civic functions and the promotion of Frodsham to the wider world.