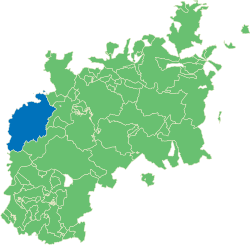 St Briavels Hundred is a hundred of Gloucestershire, in the west of the county, adjacent to the borders with Herefordshire and Monmouthshire. It originally comprised the extra-parochial area of the Forest of Dean, and the ancient parishes of

Additionally, that part of Weston-under-Penyard in Gloucestershire forms part of St Briavels Hundred.

The hundred was created at some time between 1086 and 1220 to provide a structure for the administration of the Forest of Dean. The meeting place was St Briavels Castle.[1]

The Hundred of St Briavels is the statutory area over which the rights of the free miners as to coal, iron ore and ochre but not stone extend, as regulated by the Dean Forest (Mines) Act 1838, which states: "All male persons born or hereafter to be born and abiding within the said Hundred of St Briavels, of the age of twenty one years and upwards, who shall have worked a year and a day in a coal or iron mine within the said Hundred of St Briavels, shall be deemed and taken to be Free Miners." As of 2010, the gender requirement has been recognised as archaic and women are now allowed to become free miners.