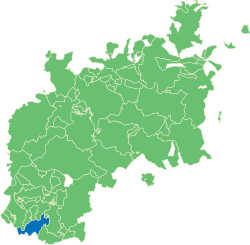 Barton Regis is a hundred of Gloucestershire, situated in the south of the county, adjacent to the border with Somerset. It is bounded on the west by Henbury Hundred; to the north by detached parts of Berkeley and Henbury hundreds; to the east by Pucklechurch Hundred; and to the south-east by a detached part of Langley and Swineshead.

It contains the ancient parishes of

as well as those parts of Bristol in Gloucestershire.

The hundred took its name from the manor of Barton just outside Bristol, mentioned in the Domesday Book as Bertune apud Bristov,[1] and later in 1220 as Berton Bristoll.[2] In Saxon and early Norman times the manor was held by the king, and was known as Barton Regis.