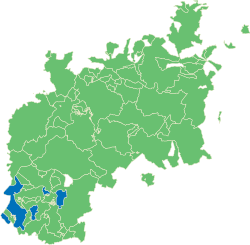 Henbury Hundred is a hundred of Gloucestershire, in the south-west of the county. It has several detached parts, but the main body of the hundred is bounded by the River Severn to the west; by Somerset and part of Berkeley Hundred to the south; by Barton Regis to the south-east; by Berkeley hundred to the east; and by Langley and Swineshead to the north. Containing some of the north-western suburbs of Bristol, it had a population of 134,847 in 2011.