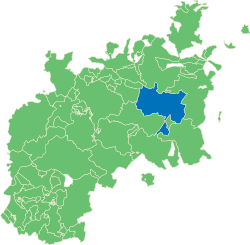 
In 1608 Aylworth and Eastington hamlets in Naunton parish (otherwise in Slaughter Hundred) became associated with Bradley hundred.[1] They were certainly recorded as such in the census reports, but later gazetteers consider the entire ancient parish of Naunton to be in Slaughter hundred.