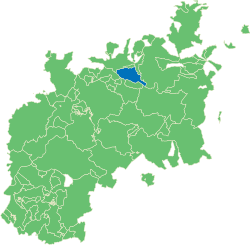 Cleeve Hundred is one of the hundreds of Gloucestershire. It comprises the ancient parish of Bishop's Cleeve.

Cleeve was named in 1327 as a distinct hundred, comprising the townships of Cleeve, Brockhampton, Cockbury and Wontley, Gotherington, Southam, Stoke Orchard, and Woodmancote. Earlier, Cleeve had formed part of Tibblestone hundred, and became separated because of the extensive liberties which the Bishop of Worcester exercised in his manor of Cleeve.[1]