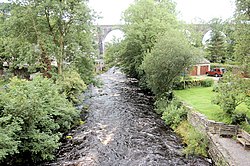 The River Twiss is a river in the West Riding of Yorkshire. The source of the river is Kingsdale Beck which rises at Kingsdale Head at the confluence of Back Gill and Long Gill in the Yorkshire Dales. Beneath Keld Head, it changes its name to the River Twiss. It has two notable waterfalls, Thornton Force and Pecca Falls, and its course follows part of the Ingleton Waterfalls Walk,[1] then through Swilla Glen to Thornton in Lonsdale and down to Ingleton, where it meets the River Doe to form the River Greta.

The landscape artist J. M. W. Turner was a frequent visitor to the area and his sketch of Thornton Force in 1816 is currently part of the Tate collection.[2]

From the caves below Keld Head there is a flow of water that joins Kingsdale Beck to form the River Twiss. It flows south over Thornton Force and Pecca Falls and through woodland to join the River Doe at Ingleton.[3]

The drop of Thornton Force is about 46 feet. Pecca Falls has three drops totalling 100 feet that fall into their own deep pools.[4]

In its upper part the river runs through a valley cut into horizontal beds of Carboniferous Great Scar limestone. At Thornton Force it crosses a notable unconformity into the underlying, steeply inclined Ordovician greywackes. The unconformity is clearly visible in the face of the waterfall. The Ordovician strata influence the character of the steep and narrow Swilla Glen and its waterfalls until, just north of Ingleton, the river crosses the Craven Fault and onto Carboniferous Limestone once again.[4]