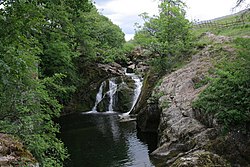 The River Doe is a river in the West Riding of Yorkshire, within the Yorkshire Dales. It is four and a half miles long, though the part bearing the name ‘Doe’ is just three and a half miles; the remaining miles being its main headwater, the Chapel Beck.

The river's source as the Chapel Beck is in a pool named the Jingle Pot just outside Chapel-le-Dale. From here the Beck flows south-west until it disappears underground at God's Bridge south-west of Chapel-le-Dale: the stream emerging from beneath the 'Bridge' is the River Doe. From here the Doe flows through Twisleton in a straight line in a south-westerly direction to Ingleton, where it meets the River Twiss, and the two rivers form the River Greta, a tributary of the River Lune.

The whole course of the river is contained within the walls of the cliffs either side, and this gorge narrows in its lower part to becomes the Baxenghyll Gorge, where the river's pretty waterfalls are found.

The nominal source of the River Doe is a place named God's Bridge, which is not a bridge but a natural formation where Chapel Beck disappears underground and the Doe emerges. From here the river flows south-west, fed by a number of small unnamed springs on sides of the dale. The first named tributary is Light Water Spring which feeds north-west into the river near a disused quarry.

Near Twisleton Dale House, the river can be crossed by some stepping stones at a fording point as well as some 700 yds later near the disused granite quarry. Further down stream near Twisleton Hall there are another set of stepping stones at a fording point just above Beezley Falls. After flowing under a footbridge, there are another set of falls, Snow Falls, just below the quarry which is operated by Hanson.[1]

The river continues past several disused quarries and a footbridge until it reaches the town of Ingleton where it forms a confluence with the River Twiss.

The main rock of the river valley is turbidite sandstone with some siltstone which are prevalent in the waterfalls and plunge pools. These lay on a bed of Precambrian sedimentary rock which show evidence of its oceanic origins in the ripple and folding marks on exposed surfaces.[3]

The river is home to Brown trout.[4] From Beezley falls to Snow falls, the sides of the gorge are lined with a variety of trees and shrubs.[5]