Trellech (occasionally spelt Trelech, Treleck or Trelleck) is a village and ancient parish in Monmouthshire, close to Monmouth. The parish includes Botany Bay, Catbrook, Trelleck Grange, The Narth and Parkhouse.

In the Middle Ages, Trellech was a great town, but it has long since declined into a village. The old town site is the subject of archaeological interest.

The whole village is designated as a Conservation Area.[1]

The name "Trellech" is from the Welsh language and means either "the town of slates (tre(f) llech) or "three slates" (tri llech). There are 26 known spellings for the village, including those mentioned above which can be found on road signs at three of the six entrances into the village. 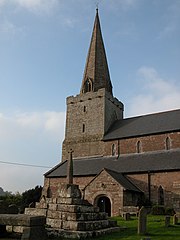 The Church in Wales parish church is St Nicholas, and it is the focal point of the village. It is a Grade I listed building.[2]

The church has an elegant pointed and prominent spire, a font and ancient sundial. A church on this site was endowed by Kings Ffernwael ap Ithel and Meurig ap Tewdrig who were rulers of Gwent in the 7th and 8th centuries. The Preaching Cross in the churchyard may date back to this time, as may the font.

The present building dates from the 13th and 14th centuries. The early English Gothic stonework has been dated to between 1225 and 1272, and that of the Decorated Gothic up to 1350.

The original spire fell in the eighteenth century, damaging the roof of the nave, and a contemporary reference attributes this to "lightning and storms". At the end of the last century the church was in a neglected state and was extensively renovated and re-roofed. During 1974 considerable repairs were undertaken to the north and south aisles, and in 2001 the majority of the churchyard dry-stone wall was removed and rebuilt. There remains a fair amount yet to be done to the building, however, if it is to be kept at a reasonable standard.

There are three standing stones in the village, known as Harold's Stones. The history of Trellech as such though begins in the Middle Ages.

Trellech was one of the major towns of mediæval Wales, the remains of which have been subject to excavations which have been sustained over many years and which continue today. It is most likely that the town was established by the De Clare family specifically for the exploitation of local supplies of iron ore and charcoal, to provide weapons, armour and iron work for their military advances in Wales, including the building of Caerphilly Castle.[3]

By 1288 there were 378 burgage plots recorded in Trellech, which would have made it bigger than Cardiff or Chepstow at the time. Trellech was largely destroyed in 1291, however, as a result of a raid following a dispute over alleged deer poaching. The Black Death struck in 1340 and again in 1350. Subsequently the ravages of Owain Glyndŵr and his men in the early 15th century further reduced the prosperity and in consequence the importance of Trellech.

Archaeological investigations at Trellech have been led since the early 1990s by the South Wales Centre for Historical and Interdisciplinary Research at the University of Wales, Newport.[4] There is currently some dispute over the layout and development of the mediæval town and its environs.[5]

In 2005, young archaeology graduate Stuart Wilson privately bought a field in which, he was convinced, were remains of the lost mediæval town.[6] His interest in this field and the possibility that his hunch might be correct was the subject of a 30-minute BBC Radio 4 documentary, presented by the archaeologist Francis Pryor, and entitled The Boy Who Bought a Field, broadcast on 6 March 2006. The programme revealed that Wilson had apparently discovered mediæval walls and yard-paving. According to the Monmouth Archaeological Society, "there is now no room for debate"[7] that the excavations by Wilson and others have now identified the main site of the mediæval town to be around the minor road towards Catbrook, to the south of the current village on what is now farmland. This site was first identified by Julia Wilson (no relation to Stuart) in an article in the journal Current Archaeology, "A New Location for an Old Town". 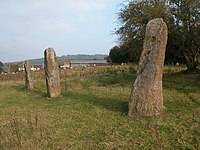 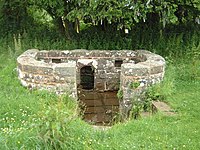 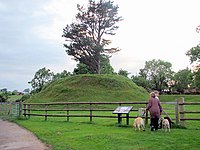 Harold's Stones are large monoliths of conglomerate "pudding stone", standing in a field to the south of the village. They take their name from the Harold Godwinson, but date back to the Bronze Age. Their origin or purpose is unknown, though some have speculated that they were aligned on the winter solstice with the Skirrid mountain, known as the "Holy Mountain of Gwent".[8] A fourth stone, on nearby common land, was destroyed in the 18th century.[9] The Standing Stones are the property of the Davies family of Crosshands Farm in Trellech. The family have always been happy to keep the field open to the public, but ask that their property is respected.

Sometimes known as St Anne's Well, this can be found in a field on the left of the road to Tintern, a little way out of the village to the east. Water from the well is alleged to be rich in iron and has been thought to possess curative properties.

Tump Terret is situated within the grounds of Court Farm to the south-west of the church. It dates back to Norman times, as the site of a small motte and bailey castle; traces of its surrounding ditch remain.[10]

Other places about the village

The Lion Inn, a lively pub which holds an annual beer festival, a cider and perry festival, the entering of a team in the Monmouth raft race and a Burns Night celebration amongst other things.

The Babington Centre is owned by the Babington Educational Foundation. The Centre is a focus for many aspects of village life including film nights, concerts, educational classes, private parties and other social events.