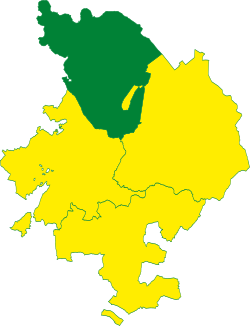 Norman Cross is a hundred of Huntingdonshire, in the north of the county, adjacent to the borders with Northamptonshire and Cambridgeshire. It contains many of the southern suburbs of the city of Peterborough, otherwise in Northamptonshire.

The Hundred of Norman Cross took its name from the Norman Cross, which formerly stood on the Ermine Street, where it was crossed by the road from Yaxley to Folksworth, roughly in the centre of the hundred. The name was derived from some Scandinavian settler from Norway, to whom the descriptive name of Northman was given, while the word Cross is also a Norse loan-word. Presumably the original English name of the hundred has been lost.[1]

*: mostly in Northamptonshire.
†: partly in Cambridgeshire.