Conington is a small village in Huntingdonshire, on the western side of the fens.

The village is about six miles south of Peterborough and two miles north of Sawtry. It lies within earshot of what is now the A1 road; an ancient route as the Roman Ermine Street, and then the Great North Road, but lies a little off and has escaped being swamped by all that comes with a major highway.

In 1639 it was in Conington that the great work of draining the fen began. The fourth Earl of Bedford set to work; the work was to lead to the creation of the great Bedford Levels in Huntingdonshire and Cambridgeshire. The work was carried through by the Cottons, a family then living in Conington Castle, a building long since pulled down. The church, built around 1500, is a spacious one with a very fine west tower.

Cotton helped to devise the concept of the modern baronetcy for King James I, becoming himself one of the first baronets.

Sir Robert Cotton, as he became, also created the famous Cotton Library which he housed in London: at the time it outranked the Royal Library, the collections of the Inns of Court and the College of Arms. 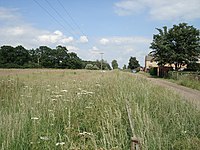