Holme is a village in the deep fenland of Huntingdonshire, on one of the rare roads across the fen, between Ramsey St Mary's to the east and Glatton to the west. Conington is along the lanes a little to the south and while the A1(M) passes through the farmland not fat west of Holme, it barely shakes the peace of the village.

Holme is a small village with a population of around 700. It has one pub, the Admiral Wells, a village shop, a village hall, a primary school and the parish church, St Giles

There is a large village green and a nature reserve, and Holme is surrounded by fields, forests and fens.

Holme has new estates integrated within the old village. Church Street has a mixture of former Estate cottages and modern houses. Once solely a farming community, Holme is now a commuter village benefiting from its nearby access to the main A1(M).

The parish church is St Giles, a church which was largely rebuilt in 1862 by Edward Browning. It has an unusual; a double dovecote. 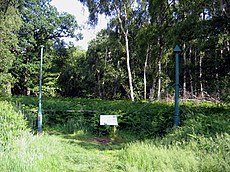 Holme Fen lies to the west of the village. Like most of the Great Fen, it has been drained for agriculture, producing rich soil, but much of Holme Fen is now a National Nature Reserve. Within the reserved are the Holme Fen Posts, sunk into the ground at the lowest land point in Great Britain and indeed the whole of the United Kingdom; the ground here is 9 feet below sea level.[1]

The first Holme Fen Post dates from 1851. It is a huge cast iron column thought to have come from the Crystal Palace Exhibition Hall, and was driven into the peat by William Wells in 1851. The top of the post was then was at ground level but over the years the peat has shrunk to such an extent that the post is now some thirteen feet out of the ground. The post is now a Grade II listed structure.

Before drainage, the fens contained many shallow lakes, of which Whittlesey Mere was one of the largest. The River Nene originally flowed through this mere, then south to Ugg Mere, before turning east towards the Great Ouse. By 1851, silting and peat expansion had reduced Whittlesey Mere to less than 1,000 acres and only three feet deep. In that year the mere disappeared, when new drains carried waters to a pumping station and up into Bevill's Leam. The drainage turned both the mere and the Holme Fen into usable farmland, but subsidence followed; a process which inspired William Wells to measure it by means of the post.

The Nature Reserve is 600 acres in extent, at the south-western edge of what was Whittlesey Mere. Holme Fen has also been designated a "Site of Special Scientific Interest" and a "Geological Conservation Review Site". It is home to a variety of birds and fungi and is the largest Silver birch woodland in lowland Britain. Its sparse acres of acid grassland, heath and raised bog are an echo of the habitat that would have dominated the area centuries ago.

The village sign shows a man leading a horse towing the Floating Church of Holme that was dedicated to St Withburga (Wihtburh) in April 1897. It was the idea of the rector of Holme, the Rev George Broke, that a church on a boat could get to areas of the fens which were difficult to reach to allow those who lived there to worship. The boat was 30 feet long and about 10 feet wide, it had a communion table, a font, a lectern which doubled as a pulpit and a harmonium. Between 1897 and 1904, 74 baptisms took place aboard.[2]

The Victorian Holmewood Hall on Church Street is now a conference and training centre. The current structure was built by William Wells, Member of Parliament and the grandson of Admiral Thomas Wells.

During Second World War, the Hall was used by American Office of Strategic Services for packing airborne containers to be parachuted into occupied Europe.[3] The OSS called this effort to supply anti-Nazi resistance groups Operation Carpetbagger.[4]