Fletton is a residential area and ancient parish within the city of Peterborough, standing on the south side of the River Nene, in Huntingdonshire. The area is home to League One Peterborough United FC, known locally as The Posh, who play at London Road Stadium.

Fletton consists of two parts: Old Fletton and New Fletton; the former the site of the original village, long since subsumed in development, and the latter to the north at the head of the bridge leading over the Nene to Peterborough city centre. The boundary between the two is the Fletton Spring.

Fletton Spring rises in the west of the area near Celta Road but soon disappears underground, re-emerging near Fletton Fields before being fenced in again and eventually merging with Stanground Lode in the east.

The town has a large Italian community, served by the Italian Roman Catholic mission church of San Antonio. 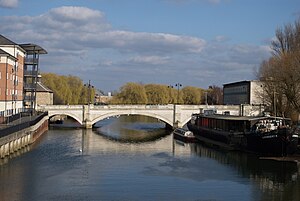 Town Bridge (1934) over the Nene; the county border

The sub-soil is Oxford Clay, the character of which led to the establishment of large brickworks. The area gave its name to the Fletton Brick Company and to Fletton Brick in the nineteenth century, when a large area of land was auctioned off to investors; this eventually became the London Brick Company, now owned by Hanson Plc. The dominance of London Brick in the market during this period gave rise to some of the country's most well known landmarks, all built using the ubiquitous Fletton.[3] During the 1950s the requirement for workers in the brick industry was far greater than that available locally and many Italians—initially housed in the old prisoner of war camps and in barracks and hostels belonging to the company—were recruited in the southern regions of Apulia and Campania.

By 1960, approximately 3,000 Italian men were employed by London Brick, mostly at the Fletton works.[4] Very soon after the first men had arrived, they were followed by around 2,000 Italian women, some of whom worked alongside the men, whilst others worked in sectors such as clothing, rubber, ceramics, food processing, agriculture and the National Health Service. Consequently, Fletton has a significant Italian population today. The Fleet complex, off the High Street, has been managed by the Italian Community Association since it opened in 1985.[5]