Chesterton is a tiny village in Huntingdonshire, near Alwalton. Chesterton and Alwalton are both perilously close to the outgrowth of Peterborough's Huntingdonshire suburbs but so far have maintained their separation.

The name of Chesterton recalls the village of Castor across the River Nene in Northamptonshire, both lying close to the abandoned Roman town of and presumed castra named Durobriuae (adjacent in the parish of Water Newton).

This small hamlet, on the Peterborough to Oundle road, was the home of the poet Dryden's family. Chesterton Manor where they lived was built in 1625, although now gone, fortunately one of the windows was saved and is now installed in the library of Elton Hall.

In the early English church however are two monuments sit as a memorial to the poet's cousin, also John Dryden (or Driden) the other for the Bellville family who founded Chesterton House 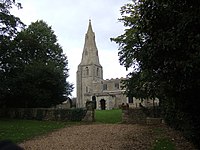