Sawley is a village in south-eastern Derbyshire, close by the border of Leicestershire, marked here by the River Trent. The population of just the civil parish was measured at 6,629 as at the 2011 Census.

Sawley Marina is one of the most prominent features of the village, with access to the region's main waterways.[1]

Between Sawley, Church Wilne and Great Wilne is the junction of the River Derwent with the Trent. It is to this that Sawley owes its position. 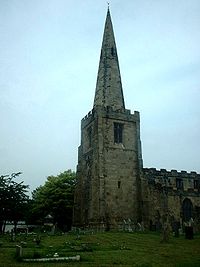 The parish church, All Saints, is of the thirteenth century and contains Anglo-Saxon and Norman work.[2] It commands a position on a small rise near the river.

Up until the 19th century, Sawley was the most important village in the area, commanding the first river crossing, Harrington Bridge, above Nottingham. travellers on the road to Birmingham had to cross the Trent either by ferry or by ford, and it was not until 1790 that the Harrington Bridge was built. This was a toll bridge, and charges were levied on all except the Lord of the Manor, his servants and the inhabitants of Sawley and Hemington, Leicestershire.[4]

In the vicinity of the Sawley churches stands Bothe Hall once owned by the Booth family. The Booths were a wealthy landowning family from Cheshire whose principal seat was at Dunham Massey. Bothe Hall was built between 1660 and 1680, and has an interior that contains some exposed ceiling beams and a regency staircase.

Sawley Marina was developed by the Davison family, and by the 1960s the marina became established as a leading inland marina after the chandlery shop was opened, and the "Narrow Boat Register" for boat sales was created. British Waterways bought the concern in 1999 of what has now become one of the finest inland marina's on the British Waterways system. The marina has the capacity to hold up to 400 boats at any one time.[6]

The Sawley Memorial Hall and Community Centre, opened by Richard Attenborough in 1958, is built in honour of those who died during the two World Wars.[7] The Sawley and District Historical Society held a display about the war years associated to the village and surrounding areas, in the Sawley All Saints Church, back in August 2009.[8]

The first know cricket match report was recorded in 1843, between Ockbrook and "Sawley Club", but the earliest known reference to Sawley was a report of a match fixture against Shardlow in 1834.[11] The original ground, aptly named ‘Trent Bridge Ground’, was situated behind the Harrington Arms near Harrington Bridge.[12] Albeit a very picturesque part of the village, the ground was beset with problems with the likes of pastoral activity and frequent flooding from the nearby river. Eventually, the club moved onto the new Sawley Park in the 1960s, but ultimately moved from Sawley to nearby West Park in 1977. The club pavilion is named after Bill Camm, a Sawley Councillor, prominent local politician and former president of the Club.[11][13]

Every year around the August Bank Holiday, Sawley All Saints holds a flower festival, with themed floral displays inside the church and a beer festival held in the village. There are several events throughout the year including a May Day festival, and a Garden Trail.