Kegworth is a large village (a place of approximately 3,500)[1] in Leicestershire. 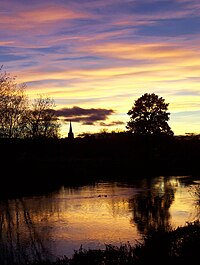 Kegworth sunset from the Soar Bridge

The village stand on the west bank of the River Soar, which here forms the county border with Nottinghamshire. It is on the A6 near junction 24 of the M1 motorway.

The village is close to East Midlands Airport. An air-crash incident in 1989 in which an aeroplane came down on the motorway just short of the airport's runway, at the eastern side of the airport, has since been referred to as the Kegworth air disaster.

A date cannot be put on the foundations of the first settlement, although Anglo-Saxon burials have been found in Kingston-on-Soar and at Hathern, a pin from the 7th century was also found near the hermitage which may indicate the date and location of the earliest settlers. The name of Kegworth comes from Old English but may incorporate a Danish name; it means Kaggi's enclosure'. Alternatively it may mean locked enclosure, from the Old English cæg ("key").

The village was recorded in the Domesday Book as being held by Earl Harold (who became the last of the Saxon kings). After Harold's defeat at the Battle of Hastings in 1066 the Earl Hugh of Chester was given the land by William the Conqueror. It was recorded at that time as Cachworde, Caggworth and Cogga.

After the royalists defeated Simon de Montfort in 1265, estates gained by the Earl of Gloucester included land in Kegworth. The privilege to hold a weekly market was granted in 1290.

Although farming was a large factor in Kegworth life and still remains on the fringes, industry started in the late 18th century/early 19th century with the introduction of stockingers' shops. Some still exist (for example behind the former Britannia public house) and can be recognised by the long rows of windows on the first floor. As the industry grew, small courtyards of cottages were built in the old farm yards. Women and children also worked when they could, and the hosiery and lace trade were ranked as two of the most important industries in the village from 1841 onwards. The Kegworth hand frame stockingers were highly skilled in the art of making silk stockings and they received many orders from royalty and people of high rank. Queen Victoria, the Prince of Wales, the Danish Royal Family and the King of Spain were all customers of the stockingers of Kegworth.

Meeting House Yard lay behind the present 'Friends' Cottage', and included a Quaker graveyard. The last trace of these 'yards' was demolished when the entrance to Australia Yard was removed to make way for the library in High Street.

A depression in the 1890s coincided with the introduction of the internal combustion engine, a motorbike factory was started which developed into the present Slack and Parrs.

There were still socks and stockings being made in the village as late as the 1940s.

Despite the growth in trade and manufacturing, there was only a very slight increase in population during the 19th century. The number of inhabitants rose from 1,416 people in 1801 to 2,078 a century later, but with actual decline in some decades, today there are approximately 3,500 people living in the village with 1,500 houses.

Kegworth has always prospered from its advantages of trade and routes. Originally these were farming, road and river, later textiles, railway and canal, and now light industry, motorway and airport. It has been lucky in having relative prosperity and slow but steady growth which has given it the character of a friendly, active community.

The earliest surviving building is the church. The tower base dates from 1250 and the rest was built in 1370 when the two manors of Kegworth were united under a single Lord of the Manor.

The next oldest building visible is the Cruck Cottage forming the street front of the Cottage Restaurant. This is from the 15th century, but the stucco covering conceals its age. Many other buildings similarly hide their oldest parts under stucco or modern fronts as at the top of Packington Hill, where early 18th century timber frames show at the rear.

Many buildings in High Street and London Road date from the 18th century when the main London to Manchester road went up High Street and down Packington Hill. Some were town houses, others farmhouses with yards. Most of the latter have had their yards subsequently built on. The barn of number 55 High Street was demolished in 1979 to make room for another house, but the farmyard of number 48 remains, although the farmhouse was rebuilt in Victorian times.

The internal road system of the village gradually developed as time went on as it became necessary to obtain access to neighbouring villages.

The Romans used a ford across the River Trent nearby and a Romano-British farm lies at the end of Long Lane. A Saxon cemetery was found two hundred years ago and the bumps and hollows between the A6 and the River Soar may be the remains of a Saxon village.