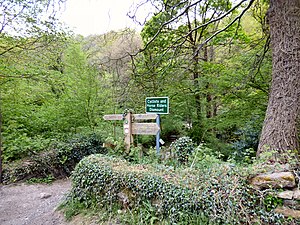 The Goyt Way is a ten-mile walking route along the River Goyt, running from the Etherow Country Park in Cheshire (east of Compsall), south along the river, alternatively on the Cheshire and Derbyshire banks, to Whaley Bridge, which stands across the river in both counties.[1] It runs all within the valley of the Rover Goyt.

The route is part of the longer Midshires Way.

The path is waymarked, and intersects with the Cheshire Ring Canal Walk and the Peak District Boundary Walk. It passes through such villages as Compstall, Marple, Strines, Brookbottom, Hague Bar, New Mills and Furness Vale. In its latter stages, it follows the towpath of the Peak Forest Canal to its terminus at Whaley Bridge.