Flixborough is a village in Lincolnshire, standing near the River Trent, about three miles north-west of Scunthorpe.

This is a commercial port village: Flixborough Wharf handles approximately 600,000 tons a year.[1] Less happily, the village is noted for the 1974 Flixborough disaster.

The parish church is All Saints’ Church (which is Grade II listed).

The village public house is The Flixborough Inn on High Street.

Flixborough is one of the Thankful Villages; those which lost none of their men in the Great War (1914-1918). It is indeed Twice-Thankful, for all its men returned alive also after the Second World War too. Consequently, it is one of the few villages in the land with no war memorial.

Eminson suggests that the first part of the name is an early form of the word cliff, and as the original settlement stood on a sloping cliff overlooking the River Trent, the village's name can be translated as "fortified dwelling on the cliff slope".[2]

A famous son of Flixborough is Sir Edmund Anderson, who was Chief Justice of the Common Pleas during the reign of Queen Elizabeth I and tried Mary, Queen of Scots.

The remains of an Anglo-Saxon settlement in the parish of Flixborough were excavated by Humberside Archaeology Unit between 1989 and 1991.[3] The village was located 5 miles south of the Humber, overlooking the floodplain of the River Trent. During the two-year programme, an unprecedented Middle to Late Saxon rural settlement sequence was uncovered, dating between the early 7th and early 11th centuries AD. It is particularly exceptional because of the association of 40 buildings, floor surfaces and massive refuse dumps.[4][5] 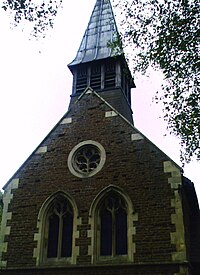 Church of All Saints, Flixborough

Kelly's Directory in 1900 gives a lively account of Flixborough:

On Saturday 1 June 1974 at 16:53 Flixborough was at the centre of the UK's worst industrial accident, when the Nypro Works[6] chemical plant was devastated by an explosion, known as the Flixborough Disaster.

The plant manufactured Caprolactam. Escaping cyclohexane formed a flammable vapour cloud and ignited. Twenty eight people died and more than 100 were injured. Around 100 homes in the village itself were destroyed or badly damaged. There is a memorial to the disaster in the village.