Manton is a village and parish in the Lindsey part of Lincolnshire. The population of the civil parish at the 2011 census was 123.[1] The village is situated just south from the town of Scunthorpe, and about six miles south-west from the town of Brigg.

The parish includes the hamlet of Cleatham, which forms part of Corringham Wapentake, while the remainder of the parish forms part of Manley Wapentake.[2] Cleatham was a civil parish between 1866 and 1936.[3] 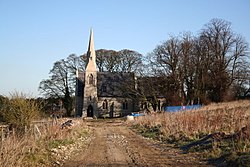 The parish church is a Grade II listed building dedicated to Saint Hybald. It was built of limestone in 1861 by J. M. Hooker, and Wheeler of Tunbridge Wells.[4] The church was made redundant by the Diocese of Lincoln in 1998, and it was sold for residential use in 2003.[5] Its parson from 1568 was John Robotham, who was accused of missing evening prayers and even Easter communion in order to play bowls. He had a number of legal battles with parishioners, some of whom he served a summons on during church services.[6]

Cleatham Hall is a Grade-II listed house dating from 1855 but with earlier origins.[7]

Cleatham bowl barrow is a Bronze Age scheduled monument located about 200 yds to the east of Cleatham Hall.[8]

The last known player of the Lincolnshire bagpipes, John Hunsley, lived in Manton in the mid-1800s.[9]