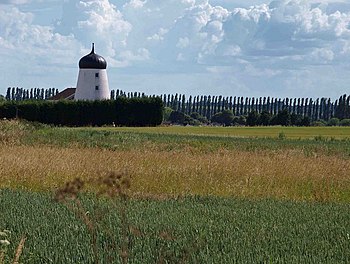 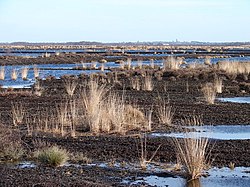 Hatfield Moors towards the Isle of Axholme

The Isle of Axholme is part of northern Lincolnshire, in the north-western corner of Lindsey, against the boundaries with Nottinghamshire and Yorkshire. It is the only part of Lincolnshire west of the River Trent.

The Isle is found in the open country between the three towns of Doncaster, Scunthorpe and Gainsborough. It forms the western division of Lincolnshire's Manley Wapentake.

The Isle of Axholme was indeed an island in former days; a land slightly raised above the fenland, with rivers and marsh all around it, though it might more properly have been "isles" as each village was on its own rise above the surrounding marshland.

Much of the northern part of the Isle is flat, with rich farmland used mainly to grow wheat and sugar beet. The land is particularly fertile due to its history of annual flooding from the Trent and peat soil which was created by dense ancient woodland which covered much of the Isle. Even today, in many parts of the northern Isle, petrified wood can be found at about 6ft below ground which is a relic from this woodland, locally called "Bog oaks".

In 1833, Bartholomew's Gazetteer had the following description:

Axholme, Isle of Area of slight elevation above flat and formerly marshy tract bounded by the Rivers Trent, Torne and Idle. Towns include Crowle, Belton, Epworth and Haxey on higher ground and Owston Ferry and West Butterwick beside the River Trent

A long-distance walking route, the "Peatlands Way" traverses the Isle.

There are three small towns on the Isle of Axholme:

Axholme means "island by Haxey", from the town name with the Norse holmr, meaning "island", in place of the Old English suffix -ieg, also meaning "island". The name was recorded as Hakirhomle in 1196. 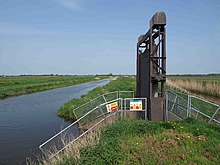 Drains on the Isle

The Isle is known for the early influences of the Dutchman, Cornelius Vermuyden who initiated the realignment of several of the highland carriers flowing through the district allowing increased agricultural production. This early agricultural activity has left a legacy in the unique strip farming which is still in existence around Epworth. The watercourses of the Isle and the surrounding area are managed by the Isle of Axholme Internal Drainage Board who maintain 188 miles of watercourse and 18 pumping stations.[1] The Internal Drainage Board also provide water level management to the adjacent Thorne Moors and the Hatfield Moors, both environmentally sensitive areas.