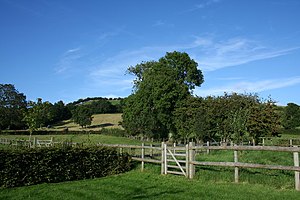 The Shropshire Way is a waymarked long-distance footpath running through Shropshire. It runs 139 miles around the interior of the county in a large loop. Small sections of the footpath run through the adjacent counties: through Flintshire at Bettisfield; Montgomeryshire at Llanymynech; and Herefordshire, west of Bromfield. 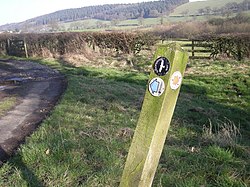 The Shropshire Way by Wenlock Edge

The route when marked on a map of the county loosely resembles a 'hangman's noose' with the rope dangling from the northern border of Shropshire at Grindley Brook.[1] The route then runs south to Wem and then to Clive and Grinshill where the circular loop begins, taking you to Shrewsbury, then by way of Lyth Hill further south into the Shropshire Hills.

In the Shropshire Hills Area of Outstanding Natural Beauty an additional loop on the route takes the keen walker to Stiperstones, Bishops Castle and Clun linking back to the main route by way of the Onny Valley at Little Stretton and the Long Mynd.

The southern stretch of the loop runs through Craven Arms, Ludlow and by way of the Clee Hills, running over Titterstone Clee Hill and Brown Clee Hill (Shropshire's county top), over the summits.

The path then traces Wenlock Edge to Much Wenlock, Ironbridge, Coalbrookdale over the Wrekin and Haughmond Hill back to Clive and Grinshill.

This southern section of the Shropshire Way underwent a major refurbishment in 2007/2008, in which extra sections were added to make it circular in its own right and some original routes have been "tweaked" so they now go to more places of interest.[2] 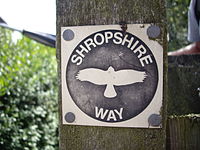 The waymark of the Shropshire Way

The path is distinctly waymarked with a buzzard symbol in black and white usually easily seen from field edges and across most country.