Todmorden is a market town in the Pennines which stands on the boundary of Lancashire and Yorkshire.

The town centre sits at the confluence of three steep-sided Pennine valleys which constrict the shape of the town. Todmorden is surrounded by moorland with occasional outcrops of gritstone sandblasted into weird shapes by winds.

The county boundary between Yorkshire and Lancashire is marked by the original course of the River Calder and its tributary, the Walsden Water, which run through the centre of the town. The Calder was diverted and culverted in the nineteenth century, its old course still visible with aerial photography. In the north of the town the boundary runs through the town’s cricket pitch, so that while most of the field is in the West Riding of Yorkshire, the pavilion is in Lancashire, and the team thus plays in the Lancashire league.

Further south, the boundary runs through the Town Hall. The Town Hall, which was presented to Todmorden by the Fielden family and opened in 1875, straddles the Walsden Water and thus it is possible to dance in the Town Hall ballroom, forward and back, across two counties.[1]

Todmorden is served by two railway stations; Todmorden and Walsden.

The name Todmorden first appears in 1641. The town had earlier been called Tottemerden, Totmardene, Totmereden or Totmerden. The generally accepted meaning of the name is Totta's boundary-valley, probably a reference to the valley running north-west from the town.[2] Alternative suggestions have been proposed, such as that the name meant "marshy home of the fox", from the Old English.

The earliest written record of the area is in the Domesday Book (1086). Settlement in mediæval Todmorden was dispersed, most people living in scattered farms or in isolated hilltop agricultural settlements. Packhorse trails were marked by ancient stones of which many still survive.

For hundreds of years, streams from the surrounding hills provided water for corn and fulling mills. Todmorden grew to relative prosperity by combining farming with the production of woollen textiles. Some Yeomen clothiers were able to build fine houses, a few of which still exist today. Increasingly, though, the area turned to cotton. The proximity of Manchester, as a source of material and trade was undoubtedly a strong factor. Another was that the strong Pennine streams and rivers were able to power the machine looms. Improvements in textile machinery (by Kay, Hargreaves and Arkwright), along with the development of turnpike roads (1751–1781) helped to develop the new cotton industry and increase the local population.

In 1801 the majority of people still lived in the uplands, Todmorden itself could be considered as a mere village. During the years 1800–1845 great changes took place in the communications and transport of the town which were to have a crucial effect on promoting industrial growth. These included the building of better roads, the Rochdale Canal (1804) and the main line of the Manchester and Leeds Railway (1841), which became the Lancashire and Yorkshire Railway in 1847. This railway line incorporated what was then the longest tunnel in the world, the 2,885 yard Summit Tunnel. A second railway, from Todmorden to Burnley, opened as a single line in 1849, being doubled to meet demand in 1860. A short connecting line, from Stansfield Hall to Hall Royd, completed the "Todmorden Triangle" in 1862, thus enabling trains to travel in all three directions (Manchester, Leeds and Burnley) without reversing.

The Industrial Revolution caused a concentration of industry and settlement along the valley floor and a switch from woollens to cotton. One family in the area was particularly influential on the town; the Fielden family. They created a "dynasty" that changed the town forever by establishing several large mills, putting up assorted impressive buildings and bringing about social and educational change.

A double murder took place at Christ Church, Todmorden on 2 March 1868. The victims' graves lie in the churchyard. Miles Weatherhill was forbidden from seeing his housemaid sweetheart, Sarah Bell, by the Reverend Anthony John Plow. Weatherhill armed himself with four pistols and an axe and took revenge first on the vicar and then on Jane Smith, another maid who had informed Reverend Plow of the secret meetings. He also seriously injured the vicar’s wife. On 4 April 1868 Weatherhill became the last person to be publicly hanged in Manchester.[3][4][5][6]

Throughout the first decade of the 20th century, the population of the Borough of Todmorden remained constant. The ten-yearly UK census returns show figures of 25,418 in 1901 and 25,404 in 1911. Like the rest of the Upper Calder Valley, Todmorden's economy experienced a slow decline from around the end of the First World War onwards, accelerating after the Second World War until around the late 1970s. During this period there was a painful restructuring of the local economy with the closure of mills and the demise of heavy industry.

On 1 January 1907, Todmorden Corporation became only the second municipality in the British Isles to operate a motor bus service. By the end of that year, the fleet had expanded to five double-deck vehicles: two by Critchley-Norris, two by Lancashire Steam (predecessor of Leyland Motors) and one by Ryknield. In 1931, the service became jointly operated by the Corporation and the LMS railway under the name "Todmorden Joint Omnibus Committee". At its maximum size in the 1940s and 1950s, the undertaking operated 40 vehicles over 50 route miles through the rugged South Pennine terrain.

Until 1938, the town was served by no fewer than six railway stations: Todmorden, Stansfield Hall, Cornholme, Portsmouth, Walsden and Eastwood. With the exception of Todmorden station, all six closed during the middle third of the 20th century, though Walsden station reopened on 10 September 1990 on a site a few yards north of the original 1845 station. In December 1984 a goods train carrying petrol derailed and burst into flame in the Summit Tunnel between Todmorden and Littleborough causing in what is still considered as one of the biggest underground fires in transport history.[7] 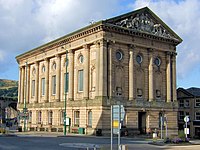 Todmorden has many attractions. It lies alongside the Pennine Way, Pennine Bridleway, Mary Towneley Loop and Calderdale Way and is popular for outdoor pursuits such as walking, fell running, mountain biking and bouldering. It has a canal and locks, Sports Centre, skateboard park, tennis courts, golf course, aquarium, cricket ground, large park and woods and many eating places. Its thriving indoor and outdoor markets sell a wide range of locally produced food. The Hippodrome Theatre shows films as well as putting on live performances. The town also has its Toy and Model Museum, library, second hand bookshops and a Tourist Information Centre, along with many independent retailers. The visual arts are particularly strong in the town. Annual events include a carnival, agricultural show, beer festival, music festival and the traditional Easter Pace Egg plays.

Todmorden retains the look of a Victorian mill town and has some notable buildings including Dobroyd castle (completed in 1869) owned by Todmorden-based Robinwood Activity Centre Ltd. who use the castle and its grounds as a residential activity centre for school children; the Hippodrome Theatre (Edwardian); an imposing Greek Revival town hall (built 1866 - 1875) that dominates the centre of town; a Grade I listed Unitarian church (built 1865-1869); and the 120 foot Stoodley Pike monument (built 1814 and rebuilt in 1854) atop the hill of the same name.

Dobroyd Castle, Todmorden Town Hall and Todmorden Unitarian church were all built at the behest of John Fielden and his sons and designed by John Gibson, who had been a member of Charles Barry's team at the Palace of Westminster.

The town hall in Todmorden straddles the Walsden Water, a tributary of the River Calder, and is thus situated in both Lancashire and Yorkshire. Designed by John Gibson of Westminster, this imposing building has a northern end which is semi-circular. One interesting external feature of the town hall is the pediment. The fine carved stonework has two central female figures on a pedestal. The left hand one represents Lancashire (cotton spinning and weaving industries) and the right hand one Yorkshire (engineering and agriculture).

Older buildings include two 18th century pubs; Todmorden Old Hall, a Grade II* listed Elizabethan manor house in the centre of town currently in use as a restaurant, and St Mary’s Church, which dates from 1476.

Stoodley Pike Monument, a 121 foot-high tower standing at the summit of 1,300 foot Stoodley Pike, dominates Todmorden's moors, and is a well known landmark on the Pennine Way.