Golcar (pronounced 'Goker' or 'Golker': the 'L' is silent in local pronunciation) is a village and township on a hillside crest above the Colne Valley in the West Riding of Yorkshire. It is located 2½ miles west of Huddersfield, and just north of the River Colne and the Huddersfield Narrow Canal. By the time of the 2011 Census the population of the council ward was 18,033.[1] The main access route is from the A62 (Manchester Road), through Milnsbridge in the bottom of the valley or via Scapegoat Hill from the A640 (New Hey Road) at the top of the hill.

Golcar is a relatively small village, but it has a long history. Named after St Guthlac, who preached in the area during the 8th century, its name is recorded in the Domesday Book as Goullakarres. During the Industrial Revolution Golcar became an important centre for weaving. Internationally renowned pharmacologist James Burrows grew up in the area. 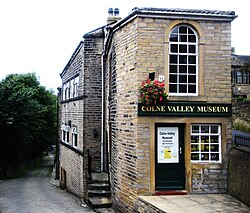 Three former 1840s weavers' cottages were converted, in 1970, into the Colne Valley Museum. The museum features several restored period rooms which are used to show temporary exhibitions. The museum was further extended in 2008 following the purchase of the adjoining former fish and chip shop.

Exhibits include a handloom and a spinning jenny, invented by James Hargreaves. In the loom chamber, spinning room, weavers sitting room and 'gas-lit' cloggers shop, the volunteer helpers give regular demonstrations of the type of crafts that would have existed during the nineteenth century.

The museum is run entirely by voluntary members and is open at weekends and on bank holidays. Various craft and working weekends are held through the year.[2]

The village has several sporting teams including the village football and cricket teams.

There are several churches including: the Anglican Parish Church of St John the Evangelist, which opened in 1829 [4] and is a good example of a Waterloo church; and Golcar Baptist Church ([1]), founded in 1835.

Each year in early May the village hosts the Golcar Lily Day.

Golcar Brass Band ([2]) was reformed in 1977 and currently practises at the Baptist Church on a Monday night.