Brighouse is a town in the West Riding of Yorkshire, on the River Calder, 4 miles east of Halifax in the Pennines. It is served by Junction 25 of the M62 motorway and Brighouse railway station on the Caldervale Line and Huddersfield Line.

In the town centre is a mooring basin on the Calder and Hebble Navigation.

The name Brighouse (or "Bridge House") originates from a building on (or close to) the bridge over the River Calder. In its early history, it was a hamlet of the nearby village of Rastrick.

There was a ford across the Calder called Snake Hill Ford, which it is believed formed part of the Roman route between Wakefield and Manchester. A wooden structure called Rastrick Bridge was recorded in 1275. The bridge was replaced by another built with timber donated by John Hanson in 1514. Hanson's son funded a stone replacement for this bridge in 1558. The river provided power for the flour milling industry and the textile mills. Brighouse's industry received a boost through the construction of the Calder and Hebble Navigation, started in 1757 by the engineer John Smeaton.

The Halifax and Huddersfield Turnpike Act of 1823 allowed for the building of Calder Bridge, or Brighouse Bridge, over the river on what was to become the A641 road; tolls were abolished on the bridge in 1875 and extensive widening work was undertaken in 1905 and 1999 (both of these latter dates being commemorated in dedication stones on the bridge).

St James' Church, which was a chapel of ease for the Parish Church of Saint Martin in Brighouse, opened in 1870, with a congregation of 450. An organ was installed in the same year. Two stained glass windows from the William Morris factory, designed by Edward Burne-Jones were installed in July 1871.[1] St James was last used on 27 December 1970; and then demolished, with the land used for residential properties.

Brighouse Library is a large building and in addition to its normal lending library services provides facilities for language courses; internet access and fax facilities. Like most public buildings wheelchair access is provided. There is also a small cafe and a lift for access to all floors.

The main shopping streets are Commercial Street and Bethel Street. 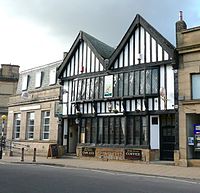 The Old Ship Inn has a painted legend along the front, saying that the exterior timbers were salvaged from an old ship.[2][3] Originally called The Prince of Wales, the building was rebuilt from timbers reclaimed from HMS Donegal in 1926.[4]

The Smith Art Gallery is in the Brighouse Library and features many paintings from the Victorian era displayed in the main hall, in addition to a changing programme of exhibitions of artwork by local artists.

The town is home to the Yorkshire Co-op Brass band, formed in 1999 by merger of the Jayess '87 and Jayess Queensbury bands.