Godalming is a town in south-western Surrey, 5 miles south of Guildford. It is built on the banks of the River Wey and is a prosperous if far-flung part of the London commuter belt. 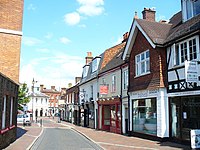 The town has existed at least since Anglo-Saxon times and gave its name to the hundred: Godalming Hundred. The estate of æt Godelmingum is mentioned in the will of King Alfred the Great, its name apparently from Godhelmingas meaning "Godhelm's people", referring to an early protogenitor or local lord.

Godalming grew in size in later ages because its location is roughly half-way between Portsmouth and London on the Portsmouth Road. Thus inns grew up in the town and tradesmen established themselves here as the coaching trade brought ready customers.

The town became a market town when in 1300 King Edward I granted the estate to the Bishop of Salisbury and with it the right to hold a weekly market and an annual fair in the town. Godalming remains a typical English market town, with a market every Friday and a selection of independent and national retailers selling clothing for all ages, shoes, watches, jewellery, fine art, books, gifts, stationery, music, guitars, computers, photography, pine furniture, antiques, flowers, hardware, food of all sorts, and household goods. In addition there are the ubiquitous banks, building societies, estate agents, travel agents, solicitors, accountants, employment agencies and charity shops. There are several pubs, restaurants and cafés, occasional visiting French and Italian markets, and an annual Godalming Food Festival.

Godalming appears in Domesday Book of 1086 as Godelminge. It had been an estate of the Crown in King Alfred's time and in 1086 it was still held by the King. Godalming's Domesday assets were 2 churches (both held by Ranulf Flambard) worth 12s, 3 mills worth £2 1s 8d, 25 ploughs, 40 acres of meadow, woodland worth 103 hogs. It rendered £34.[1] Its population was roughly 400 people.

The manor remained the King's until King Edward I granted it by charter to the Bishop of Salisbury.

In the year 1300, the town was granted the right to hold a weekly market and an annual fair. Its major industry at the time was woollen cloth, which contributed to Godalming’s prosperity over the next few centuries, until a sudden decline in the 17th century. Instead, its people applied their skills to the latest knitting and weaving technology and began producing stockings in a variety of materials, and later to leatherwork.

A willingness to adapt, and move from one industry to another meant that Godalming continued to thrive. For example, papermaking was adopted in the 17th century, and paper was still manufactured there in the 20th century. The quarrying of Bargate stone also provided an important source of income, as did passing trade - Godalming was a popular stopping point for stagecoaches and the Mail coach between Portsmouth and London. In 1764, trade received an additional boost when early canalisation of the river took place, linking the town to Guildford, and from there to the River Thames and London on the Wey and Godalming Navigations.

In 1726 a Godalming maidservant called Mary Toft claimed about the town that she had given birth to rabbits, and was widely believed. The foremost doctors of the day came to witness the freak event and for a brief time the story caused a national sensation. Eventually Mary was found out after a porter was caught smuggling a dead rabbit into her chamber, she confessed to inserting at least 16 rabbits into herself and faking their birth.

So successful was Godalming, that in the early 19th century it was considerably larger than today’s county town of Guildford, and by 1851 the population had passed 6,500. Already, it was becoming a popular residence for commuters, for it was connected to London by railway two years earlier, in 1849, and to Portsmouth in 1859. Today the town is served by Godalming railway station on the Portsmouth Direct Line. The first mayor of Godalming was Henry Marshall who also founded the firm of Marshalls Solicitors in 1831.

On 14 August 1818, the town was the site of the dual public hanging of George Chennell and William Chalcraft, convicted of murdering George Chennell the elder (father of one prisoner, and master of Chalcraft) and Elizabeth Wilson, his housekeeper.[2] This is considered to be the last public execution in England.

The town has a fine architectural legacy from the ages in which it prospered. There are around 230 listed buildings, in Godalming including Tudor timber framing and 17th century brickwork. Godalming Parish Church has an early Saxon chancel and Norman tower.

The 19th century town hall, nicknamed 'the Pepperpot' due to its cupola, is a distinctive octagonal building situated on the High Street. Its unique design has ensured it has become the de facto symbol of the town today.

The current building dates back to 1814 and replaced the mediæval "Old Market House" that had occupied the site since the early Middle Ages. It was in this Market House (and its predecessors) that the local Hundred Court met and discussed matters of local importance for more than a thousand years. The upstairs rooms continued to be used for civic gatherings until 1908. The Pepperpot later housed the town museum, and continues to be used as a public function room. The arched area beneath the building, at street level, has been used as a marketplace.[3]

Other significant buildings in the town include Edwin Lutyens's Red House, and a significant English public school, Charterhouse stands about a mile from the town, on the top of Charterhouse Hill. Charterhouse won the FA Cup as the Old Carthusians in 1880 and 1881.

Winkworth Arboretum, with its collection of rare trees and shrubs, is situated a few miles to the south.

Godalming came to world attention in September 1881, when it became the first town in the world to have installed a public electricity supply, which made electricity available to consumers. It was Calder & Barnet who installed a Siemens AC Alternator and dynamo which were powered by a waterwheel, located at Westbrook Mill, on the river Wey. There were a number of supply cables that fed seven arc lights and 34 Swan incandescent lights, some of which were laid in the gutters. Floods in late 1881 caused problems and in the end Calder & Barnet withdrew from the contract. It was taken over by Siemens.

Under Siemens the supply system grew and a number of technical problems were solved. However, later on in 1884 the whole town reverted to gas lighting as Siemens failed to tender for a contract to light the town, due to a survey he undertook that failed to provide adequate support to make the business viable; Siemens had lost money on the scheme in the early years, but was prepared to stay on to gain experience. Electricity returned to the town in 1904.

The comic novel The Return of Reginald Perrin, by David Nobbs, contains the following footnote: "Note: It is believed that this book mentions Godalming more than any other book ever written, including A Social, Artistic and Economic History of Godalming by E. Phipps-Blythburgh." The novel was the second in a trilogy, adapted to become a hit TV series: The Return of Reginald Perrin.

Due to its typically English appearance, attractive shop fronts and cobbled streets, the town has often been used as a backdrop for the shooting of various films and television programmes. In February 2006, High Street and Church Street, which runs from the Pepperpot to the parish church, was used in the production of The Holiday.