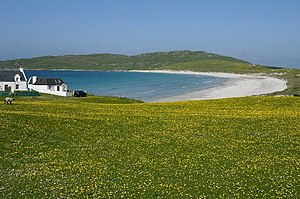 Balephuil Bay, Tiree, across the machair 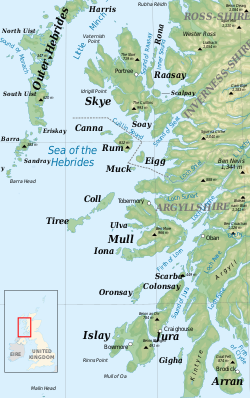 The Inner Hebrides form a diverse archipelago off the west coast of Scotland, for the most part in Argyllshire and Inverness-shire, though coastal isles of Ross-shire to the north are included also. The Outer Hebrides are a distinctive island chain beyond, to the west and north, and together the two groups form the Hebrides.

This is a wild, romantic place. The coast here is ragged and scarred, open since the dawn of time to the relentless beating of Atlantic storms, and the result is a coast of scattered islands and gouged with long sea-lochs cutting deep inland which divide it into peninsulas, isolated districts, and countless skerries and islands.

Life on the islands

The main commercial activities are tourism, crofting, fishing, and whisky distilling. Combined, the islands have an area of approximately 1,600 square miles, and had a population of 18,257 people in 2001.[1] The population density is therefore a little over 4 persons per km2 (11 persons per square mile).

Sea transport is crucial and a variety of ferry services operate between the islands and to mainland Great Britain. The Scottish Gaelic language remains strong in several of the islands, and in that language the Inner Hebrides are known as Na h-Eileanan a-staigh.

Emigration to America and the later Highland Clearances of the 19th century had a profound effect on the islands, many communities vanishing and the islands left depopulated, and it is only in recent years that population levels have ceased to decline.

The Hebrides enjoy a mild oceanic climate, the islands bathed in a blanket of water warmed by the Gulf Stream.

There are various important prehistoric structures, many of which pre-date the first written references to the islands by Roman and Greek authors. In the historic period the earliest known settlers were Picts to the north and Gaels in the southern kingdom of Dalriada before the islands became part of the Suðreyjar kingdom of the Norse, who ruled for over 400 years until sovereignty was transferred to Scotland by the Treaty of Perth in 1266. Control of the islands was then held by various clan chiefs, principal of whom were the MacLeods and MacDonalds.

The islands form a disparate archipelago of which the largest are, from south to north Islay, Jura, Mull, Rùm, and Skye, all but the last belonging to Argyll. Skye, in Inverness-shire, is the northernmost of the large islands, the largest of all the Inner Hebrides and most populous, with an area of 640 square miles and a population of about 9,200.[2][3]

The southern group are in Argyllshire, an area roughly corresponding with the heartlands of the ancient kingdom of Dalriada. The northern islands are part of Inverness-shire.

Tobermory, the largest village of Mull

Sgurr Alasdair, Skye, the highest peak in the Inner Hebrides

The ten largest islands are as follows.

The geology and geomorphology of the islands is varied. Some, such as Skye and Mull, are mountainous, whilst others like Tiree are relatively low lying. The highest eminences are found in the Cuillin hills of Skye, although peaks over 1,000 ft are common elsewhere.[2]

Much of the coastline is machair, a fertile low-lying dune pastureland.[6] Many of the islands are swept by strong tides, and the Corryvreckan tide race between Scarba and Jura is one of the largest whirlpools in the world.[7]

The hand of man 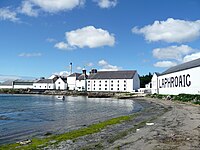 The 36 inhabited islands of the Inner Hebrides had a population of 18,257 at the time of the 2001 census. Of the uninhabited islands, there are 43 greater than 74 acres.

Records for the last date of settlement for the smaller islands are incomplete, but most of them would have been inhabited at some point during the Neolithic, Iron Age, Early Historic or Norse periods. Many of the smaller and more remote islands were abandoned during the 19th and 20th centuries, in some cases after continuous habitation since the prehistoric period. This process involved a transition from these places being perceived as relatively self-sufficient agricultural economies[8] to a view becoming held by both island residents and outsiders alike that the more remote islands lacked the essential services of a modern industrial economy.[9] However, the larger islands have retained their populations well, which grew overall by more than 12% from 1981-2001.[1]

The main commercial activities are tourism, crofting, fishing, and whisky distilling (centred on Islay). Overall, the area is relatively reliant on primary industries and the public sector; there is a dependence on self-employment and micro-business, and most parts are defined by Highlands and Islands Enterprise as economically "Fragile Areas". However, the islands are well placed to exploit renewable energy, particularly onshore and offshore wind and the Sleat peninsula of Skye is an example of a more economically robust area.[10][11][12] Some of the islands have development trusts that support the local economy.[13]

The earliest written references that have survived relating to these islands were made by Pliny the Elder in his Natural History, where he states that there are 30 "Hebudes". Writing about 80 years later in the period 140-150 AD, Ptolemy, drawing on the earlier naval expeditions of Agricola refers to the "Ebudes", of which he writes there were only five, thus possibly specifically meaning the Inner Hebrides.[14][15] Pliny probably took his information from Pytheas of Massilia who visited Britain at some time between 322 and 285 BC. It is possible that Ptolemy did too, as Agricola's information about these coasts was of poor quality.[14][15]

Watson (1926) states that the meaning of Ptolemy's "Eboudai" is unknown and that the root may be pre-Celtic.[16] Other early written references include the flight of the Nemed people from Ireland to "Domon and to Erdomon in the north of Alba", which is mentioned in the 12th century Lebor Gabála Érenn.[15] Domon, meaning the "deep sea isle" refers to the Outer Hebrides and Erdomon, meaning "east of, on or near Domon" is thus the Inner Hebrides.[15]

The individual island and place names in the Outer Hebrides have mixed Gaelic and Norse origins.[17]

The ruins of Dun Ringill, near Elgol on Skye

The Inner Hebrides share much of their history with their neighbours, the Outer Hebrides.

They were originally settled in the Mesolithic era and have a diversity of prehistoric sites: a flint arrowhead found in a field near Bridgend, Islay has been dated to 10,800 BC, albeit that it may be from a summer hunting party rather than permanent settlement.[18] Burnt hazelnut shells and microscopic charcoal found at Farm Fields, Kinloch on Rùm indicate a settlement of some kind and this is amongst the oldest evidence of occupation in the north.[19][20][21] Three stone hearths and traces of red ochre found on Jura and dated to 6000 BC are the earliest stone-built structures found so far in the north.[22][23] However in general the Neolithic sites in the Inner Hebrides lack the scale and drama of those found in Orkney and the Outer Hebrides.

There are numerous Iron Age sites including the remains of Dun Ringill fort on Skye, which are similar in layout to that of both a broch and a complex Atlantic roundhouse.[24]

In the historical age, the Inner Hebrides, or at least the southern parts, in Argyll, were settled from Ireland to form part of Dalriada formthe 6th century.[25] This encompassed roughly what is now Argyllshire, Buteshire and Lochaber (in Inverness-shire) and County Antrim.[26] In Argyll, Dalriada had three main kindreds: Cenél Loairn in north and mid-Argyll, Cenél nÓengusa based on Islay and Cenél nGabráin based in Kintyre. By the end of the 7th century a fourth kindred, Cenél Comgaill had emerged, based in eastern Argyll.[26]

Columba's foundation of a monastery on Iona ensured that these islands became a centre of Christianity, sending missionaries to evangelise the island - the Scots, the Picts and English all had churches founded from here.

Vikings fell upon the islands from 793 onwards. Iona was sacked in 802 and 806.[27] In 870 Dumbarton was besieged by Olaf and Ivarr, "the two kings of the Northmen",[28] and Ivarr's sons ruled in the Hebrides for centuries.

Somerled conquered the southern Inner Hebrides in the 12th century, and here romantic legend begins to assert itself; Somerled (Somhairle) is portrayed as a Gaelic national hero liberating the Isles from Scandinavians, though it is quite explicit from chronicles that he was as Norse as the lords he overthrew, as the name Somarliði suggests, and that Somerled's kin saw themselves as competitors for the kingship of the Isles on the basis of their descent through their mother Ragnhilt and their descent from Ivarr. Henceforth though it is from Somerled that the Lords of the Isles are counted, and the MacDonald clan chiefest among then, descended from Donald Ragnaldsson, grandson of Somerled.