Llys y Fran is a small village and ancient parish in the Dungleddy Hundred of Pembrokeshire, on the southern slopes of the Preseli Mountains. The parish includes the small settlement of Gwastad. A notable feature is Llys y Fran Reservoir and Country Park, a popular tourist attraction.

The parish has been recorded with a number of variant spellings including Llysyfran, Llys-y-fran, Llys-y-Frân and Llys-y-Vrân.[1] The word llys translates into English as "court" and y frân translates as "the crow". 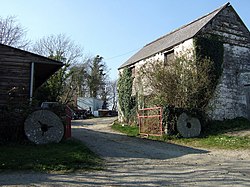 The present parish church dates from the 12th century, with alterations and improvements in the ensuing centuries, and is dedicated to St Meilyr, a 6th-century Celtic saint. Llys y Fran was originally a chapelry; in the 16th century it was controlled by various landowners in the district. One of its two bells is dated 1632. By 1833 it was the parish church.[2]

Llys y Fran parish includes the hamlet of Gwastad, where there has been a Calvanistic Methodist chapel since 1836.[1]

There may have been a timber castle north of the church, but the remains may have been destroyed when the reservoir dam was built. The site is known as Y Castell (The Castle).[3]

The teacher and composer William Penfro Rowlands (1860-1937) was born at Llys y Fran. 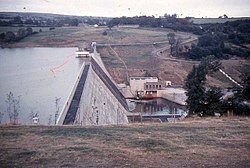 Llys y Fran Reservoir is a 212-acre man-made lake surrounded by a grassland and woodland Country Park of 350 acres with a perimeter track 6½ miles long for walkers and cyclists. The reservoir, whose dam was constructed between 1968 and 1972 by Lindsay Parkinson, is managed by Welsh Water.[5][6] The dam is 100 ft high and the lake is fed by the River Syfynwy that also feeds Rosebush Reservoir a few miles upstream to the north-east.[7] In 2008, a refurbished hydro-electric scheme was completed, raising the dam's output to an average of 26 kW: the original turbine generating considerably less.[8] In 2017 Welsh Water announced a £4million investment to enhance the park's facilities, to be completed in 2019.[9][10]

Fishing and other water activities, walking, cycling and motorsport all contribute to Llys y Fran's popularity with tourists.

Llys y Fran is an important fishery in south-west Wales, and has hosted national and international fishing competitions. Fishing with fly or bait, from mark or boat, is possible. The lake is stocked with rainbow and brown trout.[11]

As well as the 6½-mile perimeter track, there is a 1½-mile family trail, and cycle hire is available.[16]

The Llys-y-Fran Hillclimb is an annual event run by Swansea Motor Club.[17]