Cilymaenllwyd has an area of 6,494 acres and had a population of 725 in 2003. The River Tâf forms the eastern boundary. The area is part of the foothills of the Preseli Mountains rising to an altitude of 813 ft and is dissected by deep valleys of the Tâf and its tributaries.

It forms part of Derllys Hundred.[1][2] In the 20th century the main road through the parish, which links Cardigan in the north to Tenby, Pembrokeshire in the south, was designated the A478.

The principal commerce of the parish is agriculture.

Few maps mark the name Cilymaenllwyd but there are several settlements:

Glandy Cross is so-named because it lies at the junction of several byways. The main road through the settlement is the A478 and lanes lead to Mynachlog-ddu, Maenclochog, Llangolman and Llanglydwen. The hamlet has a public house (the Cross Inn), a petrol station incorporating a supermarket, a vehicle repair business and a number of domestic dwellings. Crymych Cricket Club's ground is next to the Cross Inn.


The history of the hamlet of Efailwen is associated with the Rebecca Riots. On 13 May 1839, the tollgate at Efailwen was the first to be attacked in what would later become known as the Rebecca Riots, an uprising by poor farmers to abolish what they believed was unfair taxation.[3]

Efailwen has a school (Ysgol Beca) serving surrounding settlements, a roadside eatery and a number of domestic dwellings. 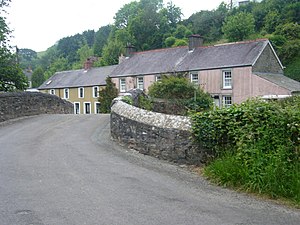 The hamlet of Login lies in the valley and sits on both sides of the River Tâf. The name Login may have come from the old Welsh-language word halogyn meaning a dirty pool or stream. The Whitland & Cardigan Railway came up the valley and there was a station in Login.[4]

The parish church, at Llandre (grid ref. SN153233), near Login, is disused and now a clothing factory.

Other places of worship in the community are: