From Wikishire
(Redirected from Domesday)
Jump to: navigation, search 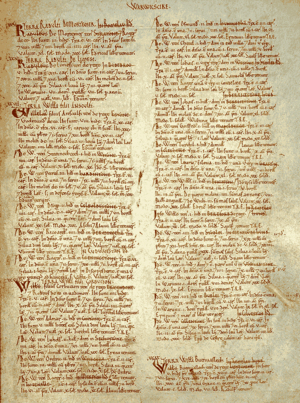 The Domesday Book: a page on Warwickshire

The Domesday Book was compiled in 1086 recording the results of the great survey of England carried out at the orders of King William I. It is also known as "The Book of Winchester".

Most of Cumberland and Westmorland are missing because they were not conquered until some time after the survey, and County Durham is lacking as the Bishop of Durham (William de St-Calais) had the exclusive right to tax Durham; parts of the north east of England were covered by the 1183 "Boldon Book", which listed those areas liable to tax by the Bishop of Durham. The omission of the other counties has not been fully explained.

The original survey was much more detailed than the summary entries in the Great Domesday and Little Domesday, but the original survey returns are lost to us. Such detail is found however in Little Domesday, giving an idea of the material which would have been gathered throughout England. The chroniclers of the time were shocked by the depth of enquiry made, and one recorded that the surveyors recorded every even down to the number of livestock.[1]

The Domesday Book was not known as such at the time; that name was a later nickname. Richard FitzNigel, writing around 1179, stated that the book was known by the English as 'Domesday', that is the Day of Judgement "for as the sentence of that strict and terrible last account cannot be evaded by any skilful subterfuge, so when this book is appealed to ... its sentence cannot be put quashed or set aside with impunity. That is why we have called the book 'the Book of Judgement' ... because its decisions, like those of the Last Judgement, are unalterable".[2]

The Domesday Book came of the Norman Conquest of 1086, the redistribution of land that it brought and the disordered state of the royal finances which must have resulted from the dispossession of the vast majority of the ruling class, and the loss of their knowledge of the land and of the taxes it was to bring in. As a result, King William sent his men out to find out how much land there was of England, who owned it and what rents and taxes it was to bring in.

"While spending the Christmas in Gloucester, William had deep speech with his counsellors and sent men all over England to each shire to find out what or how much each landholder had in land and livestock, and what it was worth".[3]

Most shires were visited by a group of royal officers (legati), who held a public inquiry, probably in the great assembly known as the shire court, which was attended by representatives of every township as well as of the local lords. The unit of inquiry was the Hundred, and the return for each Hundred was sworn to by twelve local jurors, half of them English and half of them Normans.

What is believed to be a full transcript of these original returns is preserved for several of the Cambridgeshire Hundreds and is of great illustrative importance. The Inquisitio Eliensis is a record of the lands of Ely Abbey;[4] and the Exon Domesday (so called from the preservation of the volume at Exeter), which covers Cornwall, Devon, Dorset, Somerset, Wiltshire (however only one manor of Wiltshire is included and parts of Devon, Dorset and Somerset are also wanting) also all contain the full details supplied by the original returns.

Through comparison of what details are recorded in which counties, six "circuits" can be determined (plus a seventh circuit for the Little Domesday shires).

The Domesday Book is set out shire by shire. Within each shire however it ceases to be geographically organised but lists estates by landowner. Each list opened with the holdings of the king himself, then came those of the churchmen and religious houses in order of status (for example, the Archbishop of Canterbury is always listed before other bishops). Next come the holdings of the lay tenants-in-chief again in approximate order of status, then king's serjeants and English thegns who had retained their land.

For each landholding, the Domesday Book gives the name of each manor or town, the hundred or wapentake in which it lies and then the numbers of tenants and other assets of each manor, such as mills.

In some counties, one or more principal towns formed the subject of a separate section; in some the clamores (disputed titles to land) were similarly treated separately.

The book is written in Latin, although there were some vernacular words inserted for native terms with no previous Latin equivalent, and the text was highly abbreviated.

Finally an entry may state who held the estate in the time of King Edward (which is to say before the Norman conquest, as Harold's reign was not recognised). The abbreviation for this is "TRE", which stands for tempore regis Eadweardi.

The TRE entries in the Domesday Book are a fascinating source of information about landholdings in the late Anglo-Saxon period. They show some continuity in places between the days before and after the coming of the Normans, but overall they speak of how a whole class of thegns was dispossessed at the conquest.

Individual English translations of the Domesday Book were produced in the nineteenth century. In 1968 Dr John Morris of University College London, backed by Phillimore, began the task of a consistent, scholarly translation, which began to be published from 1975.

In August 2006 a complete online version of Domesday Book was made available for the first time by the United Kingdom's National Archives.