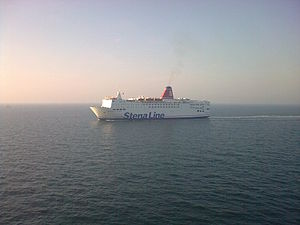 St George's Channel is the sea channel connecting the Irish Sea to the north and the Atlantic Ocean (the "Celtic Sea") to the southwest.[1]

Historically, the name "St Georges Channel" was used for a wider sea between Ireland and Great Britain; today it is the name for the narrow seas separating Pembrokeshire from southern Leinster, though it has been extended to include all the waters as far west as Cornwall and Munster. The latter seas have since the 1970s come to be called the "Celtic Sea"; the sea washing the coasts of Cornwall and Devon, Wales and Ireland.

The major ports on St George's Channel are:

All the notable islands in St George's Channel are close off the coast of Pembrokeshire. These isles are known for their wildlife; seabird colonies, seals and protected habitats are found here, notably Skomer and Skokholm south of St Bride's Bay and Ramsey Island at its north.

Saltee, a small isle belonging to County Wexford, lies a little to the southwest of the shipping lanes across the channel.

Name of the channel

The name "St George's Channel" is recorded in 1578[3] in Martin Frobisher's record of his second voyage. It is said to derive from a legend that Saint George had voyaged to Roman Britain from the Eastern Empire, approaching Britain on the channel that bears his name.[4] The name was popularised by English settlers in Ireland after the Plantations.