Epsom is a town in Surrey. Epsom has almost become caught within the spreading conurbation and parts are indeed contiguous with it, though sufficient green space exists around the town to retain a memory of its rural past and immediately to the south are the chalk downland of Epsom Downs up which the town climbs.

Epsom is famous for two things: the racecourse, where the Derby is held, and Epsom salts.

Epsom lies within the Copthorne hundred.

The name of Epsom derives from Ebbanham ("Ebba's home"), after a presumed Anglo-Saxon landowner. A string of settlements ending in –ham lie along the northern slopes of the Downs, including Effingham, Bookham, and Cheam.

The Epsom Derby, by Théodore Géricault 1821

The only relic from the period of the town's Anglo-Saxon foundation is a 7th-century brooch found in Epsom and now in the British Museum.

The early history of the area is bound up with the Abbey of Chertsey, whose ownership of Ebbisham was confirmed by King Athelstan in 933.

Epsom appears in Domesday Book of 1086 as Evesham. It was held by Chertsey Abbey. Its Domesday assets were: 11 hides; 2 churches, 2 mills worth 10 shillings, 18 ploughs, 24 acres of meadow, woodland worth 20 hogs. It rendered £17.[1] The town at the time of Domesday Book had 38 peasant households grouped near St Martin's Church. Later, other small settlements grew up at the town pond (now the Market in the High Street), and at Epsom Court, Horton, Woodcote, and Langley Vale.

The Epsom Derby, the second leg of the English Triple Crown of Thoroughbred Racing is run each June on nearby Epsom Downs Racecourse. 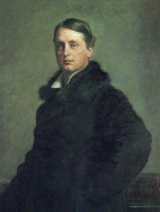 The British Prime Minister, Lord Rosebery, was sent down (expelled) from the University of Oxford in 1869 for buying a racehorse and entering it in the Derby − it finished last. Lord Rosebery remained closely associated with the town throughout his life, leaving land to the borough, commemorated in the names of Rosebery Park and Rosebery School. A house was also named after him at Epsom College, a public school located in Epsom.

Historically, Epsom was known as a spa town, although there is little to see nowadays apart from a water pump. There were entertainments at the Assembly Rooms (built around 1690 and now a pub). A housing estate has now been built upon the wells.

Epsom was visited by Samuel Pepys in 1663 at which time the town was famous for its wells; the visit is noted in his diaries. Around the same time (5 and 10 June 1662) the Dutch artist Willem Schellinks visited Epsom, resulting in both a detailed description of the trips to the wells in his travel journal (the Dagh-register) and a number of drawings of Epsom.

Epsom salts are named after the town. Epsom salt (magnesium sulphate) was originally prepared by boiling down mineral waters at Epsom.

Owing partly to its position in the London commuter belt allowing easy access to the metropolitan conurbation to the north and the rolling Surrey countryside to the south, the Epsom area was named in August 2005 by a Channel 4 programme as the "Best Place to Live" in the United Kingdom", and ranked at numbers 8 and 3 in subsequent years.[2][3]

The Epsom Playhouse was opened in 1984 and is run by the local council.[4]

Epsom Clock Tower is a slightly vulgar Victorian redbrick construction in the middle of the town. It was built in 1847, replacing the watchhouse which stood from the 17th century, and was built with heraldic lions of Caen Stone at the four corners of the tower base. A bell was added in 1867. By 1902 the lions had been replaced by lanterns, (which were replaced by the current globe lights in 1920) and the toilet buildings added either side of the tower.[5]

The Ashley Centre, a shopping mall, was built in the early 1980s and subsequently parts of the high street were pedestrianised as part of the construction of the town's one-way system. In the 1990s, a large multiplex Odeon cinema was built in Upper High Street.

The late 1990s saw the development of the Ebbisham Centre, a community service based development, including a doctors' surgery, Epsom Library, a cafe and a health and fitness centre. The Derby Square expanded and includes a number of franchise chain pubs/bars.

The University for the Creative Arts has one of its five campuses in Epsom. Laine Theatre Arts, an independent performing arts college, is based in the town. Students have included Victoria Beckham. Leisure facilities in and around the town include a leisure centre (the Rainbow Centre) on East Street; Epsom Downs Racecourse; the Odeon cinema; and the Horton Park Children's Farm.

As well as Epsom's NHS General Hospital, Epsom was also known for having a large number of psychiatric hospitals, although only one remains (St. Ebba's Hospital). Before their closure in the 1980s and 1990s, there were five major such hospitals in the area, known as the Epsom Cluster 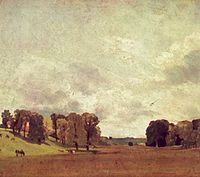 These were (in date order):

These hospitals were all built in very close proximity to each other on a 1,096 acre site on Epsom Common, which the London County Council bought to solve the overcrowding problems in its other hospitals. Some of these hospitals (Horton and Manor especially) were built quickly and on limited budgets, and were identical in layout to other asylums designed by the architects G T Hine and William Clifford-Smith who were employed by the LCC. The hospitals shared a central 'engineering works' next to Long Grove, which supplied all five establishments with water (hot and cold) and electricity. Of the asylums that have closed, three have been converted into housing (Horton, The Manor and Long Grove Hospital) and two have been run down, with only limited usage in West Park and St Ebba's, including day services and a cottage hospital.[11] These were formerly served by the Horton Light Railway.

These days Horton Country Park is home to the Horton Park Children's Farm.[12]