Pendle Hill is located in the east of Lancashire, near the towns of Burnley, Nelson, Colne, Clitheroe and Padiham, an area known as Pendleside. Its summit is 1,827 feet above mean sea level.

This is an isolated hill, separated from the Pennines to the east and the Forest of Bowland to the north-west in Yorkshire.

Pendle from the west

The sloping plateau summit of Pendle Hill is formed from the Pendle Grit, a coarse Carboniferous age sandstone assigned to the Millstone Grit Group. It overlies a thick sequence of Carboniferous Limestone beds.

Much of the lower slopes is mantled by thick deposits of glacial till or boulder clay dating from the last Ice Age. The historic decomposition of sphagnum moss on the hill has led to it being covered in peat.

The steep slopes of its eastern and southern flanks have given rise to a series of landslips. 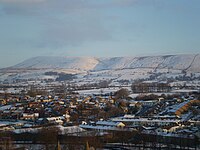 The name "Pendle Hill" combines the words for 'hill' from three different languages. In the 13th century it was called Pennul or Penhul, apparently from the Cumbric Welsh pen and Old English hyll, both meaning "hill". The modern English "hill" was appended later, after the original meaning of Pendle had become opaque, although traditionalist locals insist on "Pendle".

Pendle Hill is famous for its links to three events which took place in the 17th century: the Pendle witch trials (1612), Richard Towneley's barometer experiment (1661), and the claimed visitation to George Fox (1652), which led to the foundation of the Quaker movement. A Bronze Age burial site has also been discovered at the summit of the hill.

The most popular route for ascending the hill begins in the village of Barley, which lies to the east. This route also provides the steepest ascent. Other nearby villages include Downham, Newchurch-in-Pendle and Sabden.

"If you can see Pendle it's about to rain, if you can't, it's already started."

When the weather is fine Pendle is a popular hill-launch for paragliders and, with a north-westerly wind, for hang gliders.

In 1652, George Fox claimed to have had a vision while on top of Pendle, during the early years of the Religious Society of Friends (Quakers):

As we travelled, we came near a very great hill, called Pendle Hill, and I was moved of the Lord to go up to the top of it; which I did with difficulty, it was so very steep and high. When I was come to the top, I saw the sea bordering upon Lancashire. From the top of this hill the Lord let me see in what places he had a great people to be gathered.
—George Fox: An Autobiography, Chapter 6

Today Pendle remains strongly linked to the Quakers, giving its name to the Pendle Hill Quaker Center for Study and Contemplation; one of their centres in the United States.

The story of the Pendle witches is one of the best-known and well-documented examples of alleged witchcraft in 17th-century England.[1] The hill continues to be associated with witchcraft; large numbers of visitors climb it every Hallowe'en, although in recent years people have been discouraged by the authorities.

Pendle Hill and the surrounding area are the setting for the fourth book in Joseph Delaney's The Wardstone Chronicles, called The Spook's Battle.