Dunsop Bridge is a village in the West Riding of Yorkshire, nine miles north-west of its post town, Clitheroe in Lancashire and 25 miles south-east of that county's county town, Lancaster.

It is often cited as the geographic centre of Great Britain, although the exact point is at Whitendale Hanging Stones, near Brennand Farm, 4½ miles north of the village.[1] 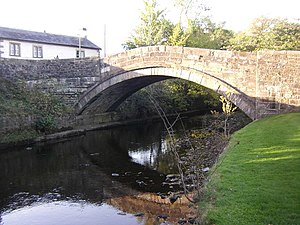 Bridge over the River Dunsop

The village is at the confluence of the River Dunsop and the River Hodder before the Hodder flows south to join the River Ribble outside Clitheroe. The bridge from which the village takes its name consists of two simple arches which span the river.

On 8 August 1967, Dunsop Valley entered the UK Weather Records with the highest 90-min total rainfall at 4.6 inches. As of July 2006, this record remains. The village is surrounded on all sides by the rolling hills of the Forest of Bowland and is located within an Area of Outstanding Natural Beauty. Nearby is the Salter Fell Track, a pass along which the Lancashire Witches are believed to have been taken to their trial at Lancaster Castle.

The rivers formed the easternmost boundary of the territory of Amounderness in the 9th century and are cited in a grant made by King Athelstan to Wulfstan of York in AD 934.[2]

From the late 11th century, Dunsop was part of the ancient Lordship of Bowland which comprised a Royal Forest and a liberty of ten manors spanning eight townships and four parishes and covered an area of almost 300 sq. miles on the borders of Lancashire and Yorkshire.[3]

Dunsop Bridge developed into a village in the mid 19th century as a result of lead mining in the area. Before that, there were only a few isolated houses and farms. Thorneyholme House, close to the village centre, was home to John Towneley, 13th Lord of Bowland, in the period up until his death in 1878. Before that, it had been home to Richard Eastwood, a breeder of racehorses and shorthorn cattle. Eastwood was land agent to the Towneleys and the last known Bowbearer of Bowland. He died in 1871 and is buried at St Hubert's, Dunsop Bridge.

In 2009, it was reported that Charles Towneley Strachey, 4th Baron O'Hagan, on behalf of the Towneley family, claimed the title of 15th Lord of Bowland. Previously, the lordship had been thought lost or in the possession of the Crown having disappeared from the historical record in late 19th century. The Towneleys had owned the Bowland Forest Estate from 1835 and it transpired that the title had been retained by an extinct family trust. Lord O'Hagan sold the Lordship of Bowland at auction.[4] The 16th Lord of Bowland was revealed to be a Cambridge University don who specialises in the history of Lancashire, its place names and dialects and has ancestral links to the forest.[5][6][7] The 16th Lord made an official visit to the village in April 2011. His Bowbearer, Robert Parker, was in attendance, together with representatives from the Bowland Higher Division Parish Council, the Forest authorities, community leaders and other dignitaries.[8][9] 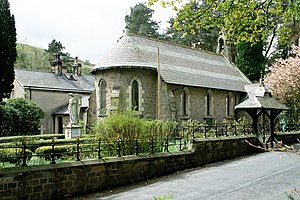 The Roman Catholic Church church of St Hubert’s was built to the design of Edward Pugin, from, it is believed, the winnings of the racehorse Kettledrum owned by Colonel Charles Towneley of Towneley Hall, Burnley in the 1861 Epsom Derby[10] The Toweneley stud was at Root Farm. The Towneleys' agent and patron of St Hubert's, Richard Eastwood, is entombed outside the front entrance to the church.

The church was opened on 2 May 1865 by Richard Roskell, the Roman Catholic Bishop of Nottingham. The mediæval font was originally from the ancient church at Burholme near Whitewell. The east and west windows are by J. B. Capronnier of Brussels and date from 1865. In its early years, the church was served by the Jesuit Order from Stonyhurst.

The middle west window depicts St Hubert who is the patron saint of hunters, as a huntsman accompanied by a stag. The Forest of Bowland was once a royal hunting forest. According to legend St Hubert’s conversion to Christianity took place on a Good Friday when, while hunting a stag, he saw a vision of a cross between its antlers and heard a voice telling him to seek instruction in the Christian faith. In 705, he became Bishop of Maastricht, later of Liege.