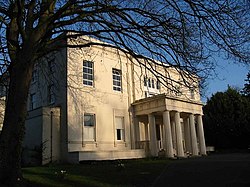 Laleham is a village in south-western Middlesex beside the River Thames. It is situated adjacent to the border with Surrey immediately downriver from Staines-upon-Thames. One village sign and the residents' association call the village Laleham on Thames.

In its south is Laleham Park by the River Thames. Across green-belt farmland to its north and south-east are Ashford and Shepperton, to its east are woods then Queen Mary Reservoir. Penton Hook Lock is on the border with Staines and Laleham Burway is directly across the river on the Surrey side. Centred a mile south along the towpath or the humped river road is Chertsey Bridge, just within the boundaries of Shepperton, marking the easternmost point of the town of Chertsey. The north of the area has a number of sports fields, including the Staines and Laleham Sports Ground, and two family pubs, on the Laleham and Ashford Roads respectively.

Laleham is just over three miles from three motorway junctions. The nearest railway station is at Staines, a mile and a half north, on the Waterloo to Reading Line, which has branch lines to Windsor & Eton Riverside and Weybridge.

There may have been a 1st-century Roman marching camp on the field which is now part of Matthew Arnold School.[1]

Iron Age spearheads from the 5th century have been found in the River Thames at Laleham Ferry. 10th-century charters record the village of Laelham.

The Middlesex section of the Domesday Book of 1086 records the village as Leleham. The manor was held partly by Fécamp Abbey from Robert of Mortain and partly by Estrild, the nun. Its Domesday assets were: 10 hides of land, 6½ ploughs, 5 ploughlands, meadow and cattle pasture. Its villagers and chief tenants rendered £5 per year to its feudal overlords.[2] The manor of Laleham was later held by Westminster Abbey.

The Church of England parish church of All Saints dates from the 12th century but was largely rebuilt in brick about 1600 and the present tower was built in 1780.[3] It is a Grade I listed building.[4] The church has a stained glass window by Wilhelmina Geddes.[5] In the 13th century Westminster Abbey had a grange and watermill on the banks of the Thames near the site of Laleham Abbey. In 1970 the nucleated village centre of Laleham was designated a conservation area. The traditional borders resemble Staines in being a long tract of land, rarely more than a mile east – west.

Laleham Abbey was Laleham House until 1928. It was designed by J.B. Papworth, wholly rebuilt in 1803–06 as the country seat of Richard Bingham, 2nd Earl of Lucan and altered, again to Papworth's designs, in the 1820s and 30s. It is a Grade II* listed building.[6] Its park covered 83 acres, some of which is now Laleham Park. The house is neoclassical with a Doric portico. Inside are marble floors and columns, a semi-circular staircase and a cupola. Maria II of Portugal stayed here for her English stay, touring three European courts during Miguel of Portugal's 1826-1834 insurrection.[7] The house was divided into apartments in 1981.[1]

Laleham has 25 listed buildings. Church Farmhouse, next to All Saints' church, is an early 17th-century brick farmhouse with Georgian alterations. It is an example of a central chimney house with a standard layout for such a house.[8] On either side of the central chimney is a living room and the entrance is through a tiled two-storey porch, the stairs filling the space on the opposite side of the chimney. It once housed the Lucan's bailiff and was sold by in 1966[1] by the 7th Earl. Eight years later the 7th Earl was suspected of a murder, and disappeared in the early hours of 8 November 1974.[9]

There is a hatchment of the Earls of Lucan in the north aisle of All Saints Church is. East of the vestry in the churchyard is the grave of Lord Bingham, 3rd Earl of Lucan (1800–88). He was the Field Marshal who gave the order for the Charge of the Light Brigade at the Battle of Balaclava in 1854. 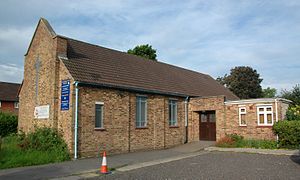 Laleham has a Church of England primary school, an archery club and Burway Rowing Club.

As well as All Saints' parish church, Laleham has a Methodist church in Edinburgh Drive. An Elim Pentecostal Church Kingdom Living Church, also meets at the Methodist church. 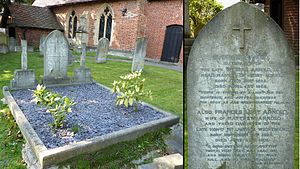 The poet and critic Matthew Arnold was born in the village and is buried in All Saints' parish churchyard. A local county-supported comprehensive school is named after him. His father Dr Thomas Arnold was headmaster of Rugby School, travelled widely and settled his family in Laleham.[10] 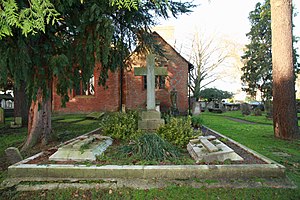 Grave of the 4th and 5th Earls of Lucan

In 1803 Richard Bingham, 2nd Earl of Lucan bought the manor from William Lowther, 1st Earl of Lonsdale.[1] Both Arnold and Lucan family names are prominent in All Saints' parish church, with memorials to various generations of those families. Charles Bingham, 4th Earl of Lucan, George Bingham, 5th Earl of Lucan and their countesses are buried in the churchyard. One of the village pubs was called the Lucan Arms pub for many years until it was renamed in the late 1990s.

Other notable family names are Buckland and Honor and the four houses at Laleham school are Buckland (Red), Arnold (Blue), Honor (Yellow) and Lucan (Green). The Reverend John Buckland was Matthew Arnold's uncle; Buckland School in Laleham was named after him.

The Reynell Baronets, originally from Devon, were substantial landowners at Laleham.

Coal and mining administrator, Alfred Robens, Baron Robens of Woldingham lived at with his wife at Laleham Abbey after his retirement in 1982.