Hanworth is village of Middlesex which has been absorbed by the metropolitan conurbation, though sitting precariously at the south-west edge of the continuous townscape, contiguous with Feltham and with Hampton.

The name of the village is thought to come from the Old English words hæn (or han) and weorþ, meaning “small homestead”.[1]

During Edward the Confessor’s time, Hanworth was a sparsely populated manor and parish held by Ulf, a huscarl (or bodyguard) of the King. After the Norman Conquest in 1066, and William the Conqueror granted Hanworth to Robert under Roger de Montgomery, the Earl of Arundel and Shrewsbury. After his death, his second son held the land until his death in the Mowbray conspiracy of 1098, after which it passed to his eldest son, Robert de Bellesme, who also rebelled against the Crown in 1102 with the result that the lands were confiscated.

Towards the end of the 14th century, the manor was held by Sir Nicholas Brembre, who was Mayor of London in 1377 and 1378. Sir Nicholas was hanged at Tyburn in 1387, having been accused of treason.

In 1512 Hanworth came to the Crown. Henry VIII enjoyed hunting on the heath surrounding the village (now constricted to Hounslow Heath) and he gave the manor of Hanworth to Anne Boleyn for life. After her execution, the manor returned to the King who held it until his death in 1547 but passing to Katherine Parr, who lived in the house with her stepdaughter Princess Elizabeth. When the princess became Queen, she stayed at Hanworth Manor several times, often hunting on the heath.

In 1784 General Sir William Roy, the military draughtsman, supervised the Principal Triangulation of Great Britain project. That measured a base line from King's Arbour, across Hounslow Heath passing through Hanworth Park, to Hampton Poor House. This measurement, which earned the General the Copley medal of the Royal Society, was the origin of all subsequent surveys of the United Kingdom, and still forms the basis of the Ordnance Survey maps today.[1]

In 1797 the manor house was destroyed by fire, leaving only the stable block, which survives today as flats, and the coach house, which was converted into homes. Tudor House was built in 1875 as a replacement for the house that was built in the manor ruins, and is today used as flats.[1]

By the end of the 19th century, William Whiteley, of Whiteleys in Bayswater, had bought 200 acres of farmland that had previously been Butts and Glebe farms. Renamed Hanworth Farms, these supplied all the produce for the store’s food hall having been transported daily by horse and cart. Following his death, his sons sold the farm to a jam manufacturer who operated there until selling the land for new homes in 1933.[1]

Baron Cottington of Hanworth was ennobled by King Charles I and when the Civil War drew near he joined the King at Oxford. Parliament confiscated his lands and Cottingham spent the remainder of his life abroad, dying in Spain in 1652. His estates were assigned in 1649 to John Bradshaw, the regicide, but were recovered by his nephew and heir Charles Cottington at the Restoration. Charles Cottingham who sold the estate though in 1670, and in time it came to Vere Beauclerk, who was created Baron Vere, of Hanworth in 1750. In the early part of the twentieth century the house was bought by a Court of Appeal judge turned politician, Ernest Murray Pollock, 1st Viscount Hanworth. 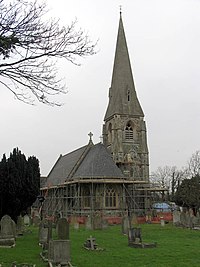 Hanworth's original parish church is dedicated to St George. There has been a church on the site, in Castle Way, since at least the fourteenth century; the church was first mentioned in 1293. The first known rector was Adam de Brome, founder of Oriel College, Oxford, in 1309.[2]

According to Daniel Lysons, vicar in 1800, the church was made of flint and stone, with a low wooden turret. As the church's living was in the hands of the lord of the manor, only the name of the rector was mentioned.

The original church included stained glass windows of the coats of arms of the Crosby family, who owned the manor in 1471; the Killigrew family, who owned the manor in the latter part of the sixteenth century; and the Royal arms of 1625, incorporating the royal cypher JR. The latter window was moved to the rectory after the church's reconstruction in 1808, before moving to its present site in the Victoria and Albert Museum in 1975. Monarchs and their consorts who are known to have worshipped here are King Henry VIII, Anne Boleyn, Catherine Parr and Queen Elizabeth I.[2] 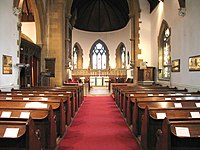 Baron Cottington of Hanworth took a further interest in St George's church. He had his son Charles baptised here on 21 July 1628 in the presence of King Charles I, the Duke of Buckingham and Mary Feilding, wife of the Marquess of Hamilton. Cottington also gave the church a silver chalice and paten, which are still used today.[2]

In 1807, it was decided that the entire church should be dismantled and rebuilt. The building of the new church was done by James Wyatt, a notable architect of the time. Wyatt only just lived to see it completed in 1812, as he was killed in a carriage accident the following year. His family are buried in the churchyard, but Wyatt himself lies in Westminster Abbey.[2]

St George's assumed its current form in 1865, when a local architect, Algernon Perkins, volunteered to redesign the church at his own expense. The spire, added at about this time, was designed by S S Teulon.[2]

The lychgate, which forms the main entrance to the church, was built in 1882. It is said to be a copy of the one in Beddington, Surrey, and was done in memory of the mother-in-law of John Lyndhurst Winslow, rector at the time.[2]

Two of the owners of Hanworth Manor, Thomas Chamber and Aubrey Vere, are buried in the church. The former has a memorial tablet, which is now in the north transept, while the latter has a gravestone on the church floor. 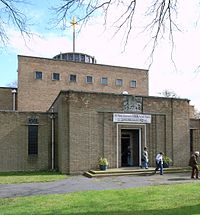 In 1935, Hanworth's had a growing population, owing to the presence of a jam factory belonging to Whiteley's. It was decided that a chapel of ease should be set up. It was founded by Bertram Pollock, Bishop of Norwich, and the Rector of Saint George's. Bishop Pollock had been born at Woodlawn, a house in Hanworth, near Hampton Road West, and part of it was used as the chapel.[3]

After the Second World War, in 1947, it was originally decided that a Nissen hut should be used to house the chapel. However, when the architect Nugent Cachemaille-Day was approached, he decided that a proper church should be built, and a site on the opposite side of Hampton Road West was chosen.[3]

The Parish of All Saints was split off from Saint George's in 1950, and the foundation stone of the new church was laid on 14 July 1951 by the Bishop of Guildford, Henry Montgomery Campbell. The church was finally consecrated on 28 September 1957 by Campbell, who by then was Bishop of London.[3]

Hanworth Aerodrome was a grass airfield, operational 1917-1919 and 1929-1947. It was in Hanworth Park; that includes the grounds of Hanworth Park House, an 1802 rebuild of Hanworth Palace. In the 1930s, named London Air Park, it was best known as a centre for private flying, society events, the aircraft manufacture by General Aircraft Limited (GAL) 1934-1949, and the visit by the Graf Zeppelin airship in 1932.[4] Amelia Earhart flew to Hanworth after landing in Ireland at the end of her 1932 crossing of the Atlantic; Walter Sickert recorded Miss Earhart's Arrival in a painting now owned by the Tate Gallery.[5] There is a public house nearby named "The Airman" in recognition of its close proximity to the aerodrome. Feltham District Council purchased the park in 1956. Feltham Swimming Baths was built on parkland beside the Uxbridge Road in 1965, later refurbished and renamed Feltham Airparcs Leisure Centre.[6][7] That public sports facility was renamed in 2010 as Hanworth Air Park Leisure Centre & Library[8]

The construction of an elevated M3 feeder road (now part of the A316) in the 1970s cut Hanworth in two; in preparation for this, the library was relocated to Mount Corner, so-named for being opposite the Hanworth Park House icehouse mound.[9] Forge Lane Infants and Junior School was built on the south side of the new road, and the war memorial was relocated.