Gunnislake is a large village in eastern Cornwall. It stands in the Tamar Valley approximately ten miles north of Plymouth, built precariously on the steep sides of the valley's western slope. The main road tumbles steeply down the slope to the river, with houses clinging to the sides.

Gunnislake is the first village reached by a traveller from Devon crossing the Tamar by way of the New Bridge, built in 1520.

Gunnislake is in the civil parish of Calstock and is close to Cornwall's border with Devon which here follows the course of the River Tamar. The New Bridge at the bottom of the village was built in the early sixteenth century and remained the lowest road bridge over the Tamar until Tamar Suspension Bridge was built in Plymouth in 1961.

The village has a history of mining although this industry is no longer active in the area. During the mining boom in Victorian times more than 7,000 people were employed in the mines of the Tamar Valley. During this period Gunnislake was held in equal standing amongst the richest mining areas in Europe.

Gunnislake's Cornish name is Lynngonna, but its development has long surpassed the village which bore that name.

The New Bridge was built around 1520 to provide a more convenient crossing than the Greystone Bridge to the north. It is 182 feet long and has seven arches. It is built of large regular granite blocks and is the best of the Cornish granite bridges.[1]

Gunnislake's development was primarily due to the dramatic increase in mining and industrial activity in the nineteenth century. Mining provided around 7000 jobs at its peak in 1862. Most mining activity ceased in the late nineteenth century which has bequeathed interest for archaeologists and students of industrial heritage.

As well as mining, other industry such as brickworks and quarries were present. Nearby, locations such as Kit Hill, Morwellham Quay, Cotehele and Calstock were mined and quarried and the Tamar was used for transporting the raw material obtained from the works. Arsenic was produced at Greenhill, Gunnislake until at least 1930.

There has recently been discovered a significant Roman fort on the outskirts of Calstock, the largest known Roman site in Cornwall and the famous painting by Turner 'Crossing the Brook' exhibited in 1815 is in fact a view of Newbridge.

Contentiously debated within the local press, the future of Gunnislake's rail-link with Plymouth has, throughout recent years, come under threat by the proposed re-establishment of a disused railway line between Tavistock and Plymouth. 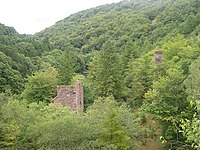 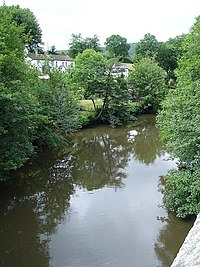 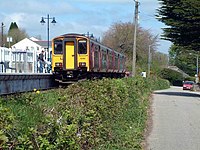 The area is mainly residential with a small handful of businesses ranging from pubs to garages and small shops. Gunnislake is located in the Tamar Valley designated Area of Outstanding Natural Beauty, though some recent industrial development has been attempted and achieved. Within early 2006 Hingston Down Quarry installed a new asphalt tower which is easily noticeable as it is proud of the skyline of Gunnislake.

Since 2001, the village has annually hosted its own festival, encompassing a variety of events throughout a week-long celebration.[2]

There is a King George's Field in memorial to King George V, in lower Gunnislake. Gunnislake Football Club is based there.