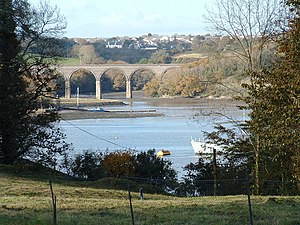 The River Lynher near Saltash, from Antony

A sketchmap of the Tamar showing tributaries including the Lynher

The River Lynher flows through eastern Cornwall from Bodmin Moor to the Tamar estuary. It is also known as the St Germans River when it widens into a broad, tidal channel close to its mouth. As such it passes St Germans and enters the River Tamar at the Hamoaze, which in turn opens into Plymouth Sound. The estuary of the Lynher is called Hallamore meaning the sea marsh).

The river is about 21 miles long. It rises in the heart of Cornwall on Bodmin Moor, between Altarnun and Bolventor at a height of about 920 feet. It then flows southeast across the moor and carves it valley between any pretty hamlets and villages such as Rilla Mill, where it oasses over a weir. The Lynher continues south-eastwards, crossing beneath the A390 Liskeard road between Callington and St Ive.

At Notter Bridge, between Notter and Landrake, the river becomes tidal, and thence flows south, broadening into a substantial tidal creek to a junction of creeks below St Germans. From here it heads eastwards and as the Lynher River of St Germans River it flows into the Tamar Estuary near Plymouth.

The Lynher River's tidal reach separates the Rame Peninsula from the body of the county.

The Lynher has four main tributaries, the largest of which is the River Tiddy, which joins it at St Germans. The smaller tributaries include Deans Brook, Withey Brook, Marke Valley and Darleyford streams and Kelly Brook.[1]

The Lynher and its tributaries are largely used for rod and line fishing, particularly for brown trout and Atlantic salmon.

Its estuary is a designated Site of Special Scientific Interest[2] and also a Special Protection Area. Many species of animals can be found here, including the kingfisher, otter, dipper, avocet, and black-tailed godwit; the triangular club-rush (scirpus) also grows on the banks. The estuary, along with the Tamar–Tavy Estuary system and St John's Lake, form the Tamar Estuaries Complex Special Protection Area (SPA),[3] as well as forming part of the Plymouth Sound and Estuaries Special Area of Conservation (SAC).[4]

Park Wood, in the Lyhner valley 2 miles southwest of Callington off the A390 road, is also designated an SSSI for its biological interest.[5]