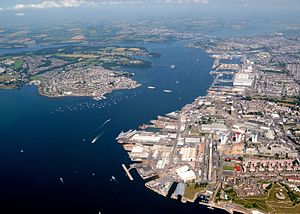 HMNB Devonport and the Hamoaze from the air 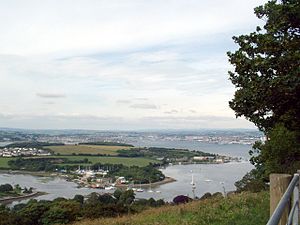 Devonport Dockyard and the Hamoaze from the Rame Peninsula

The Hamoaze (hæ) is a broad, deep, estuarine stretch of the tidal River Tamar, between the River Lynher and Plymouth Sound, dividing Cornwall in the west from Devonshire in the east. The Devon shore is occupied by the City of Plymouth, including Devonport.

The name first appears as ryver of Hamose in 1588 and it originally most likely applied just to a creek of the estuary that led up to the manor of Ham, north of the present-day HMNB Devonport (Devonport Dockyard). The name evidently later came to be used for the estuary's main channel.

The ose element possibly derives from Old English wase meaning 'mud' (as in 'ooze') – the creek consisting of mud-banks at low tide.,[1] although this is not confirmed.

The Hamoaze flows past Devonport Dockyard, which belongs to the Royal Navy. The presence of large numbers of small watercraft are a challenge and hazard to the warships using the naval base and dockyard.

Towns and villages on on the banks of the include: