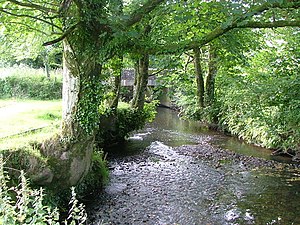 The Ottery at Canworthy Water 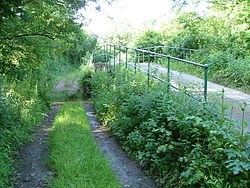 Ford and bridge at Trengune 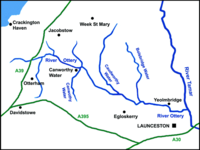 Sketch map of the River Ottery and tributaries

The River Ottery is a small river, a tributary of the River Tamar, which marks the boundary between Cornwall and Devon. It is an unusual part of the county boundary, lying west of the Tamar, for the border between the two counties for the most part follows the Tamar almost from coast to coast, but as the Ottery meets the Tamar, the border follows the Ottery for several miles before returning to the Tamar, the resultant finger of Devon west of the Tamar being almost a detached part, isolated from its county by a stretch of the Tamar crossed only by a narrow, isolated bridge.

The Ottery is about twenty miles long from its source south-east of Otterham to its meeting with the River Tamar at Nether Bridge, two miles north-east of Launceston.

With its tributaries, the River Ottery forms a major sub-catchment of the Tamar system, draining 48 square miles of north Cornwall and detached Devon. The River Ottery's basin is within the carboniferous geological formation known as the Culm Measures which stretch from Dartmoor to north Devon and across north-east Cornwall as far west as Bodmin Moor.[1][2]

The infant river initially flows north until it reaches the hamlet of Trengune. From here it adopts an east-south-easterly course which it follows to its confluence with the River Tamar.

The River Ottery system was severely affected by flooding in north Cornwall on 16 August 2004 when up to eight inches of rain fell during a single afternoon.[3] The Ottery headwaters at Marshgate and Otterham were the most severely affected.

The river flows through an isolated area of mixed farming and the only riverside settlements of any size are Canworthy Water and Yeolmbridge.

The Cornwall Rivers Project notes five "Sites of Special Scientific Interest" in the Ottery catchment including the Ottery Valley SSSI which has 82 acres of increasingly threatened culm habitat and Kernick and Ottery Meadows SSSI, also noted for its biological interest.[4][5]

The majority of the boundary between Cornwall and Devon follows the River Tamar, and British-language place-names, such as those including the element tre-, stop for the most part exactly at the Tamar, reflecting this ancient boundary. However, in the almost-detached part of Devon which lies west of the Tamar and north of the River Ottery are few place-names including tre- and far more of Anglo-Saxon origin (such as those ending in -dun and -cot), which indicates that the boundary here between the Welsh and the English is very ancient.[7][8]