Launceston is a town and ancient borough in eastern Cornwall, close to the River Tamar and River Ottery which mark the border with neighbouring Devon. Standing over and dominating the town is Launceston Castle, a circular Norman castle upon a lofty motte at the peak of the town that once served as the centre of administration for the county.

Launceston is a market town and the main shopping centre for the adjoining rural areas of west Devon and east Cornwall.

Launceston stands a mile west of the River Tamar which marks the border between Cornwall and Devon and is often referred to as the "gateway to Cornwall". It is also a mile south of the River Ottery, Devon's border across the Tamar.

Launceston's motto is "Royale et Loyale" from its adherence to the Royalist cause during the Civil War in the mid-17th century.

In the Domesday Book of 1086, Launceston is listed as Dunheued, which in Old English would be Dunheafod ("Hill-head"). The currebnt name, Launceston, is from the Cornish Lan Steffan ("Stephen's church"), referring to a monastic establishment near the town. Lansteffan is the name of the town's northern suburb across the River Kensey.

The town is built on the side of a large hill, which makes it almost immune to flooding, unlike the nearby suburb of Newport, situated at the bottom of the hill, which is susceptible to flooding by the River Kensey.

Launceston is on the main A30 east-west trunk road carrying traffic from Exeter in Devon across the Tamar and on into the far west of Cornwall. The road used to pass through the town centre but a dual carriageway bypass now carries traffic south of the town. The bypass crosses the River Tamar on the Dunheved Bridge which was built in the 1980s and substantially rebuilt in 2006/7.[1]

Launceston is approximately roughly midway between the north coast of Cornwall (at Bude) and the south coast (at Saltash). 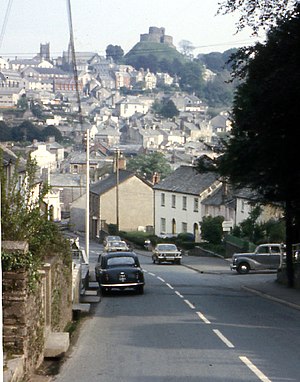 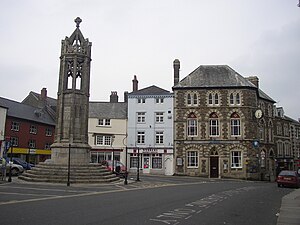 Town Square, in the centre of Launceston 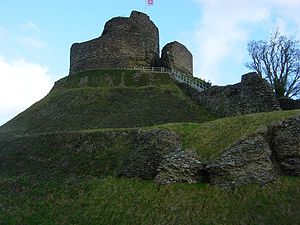 Launceston Castle the most prominent landmark of Launceston

The Cornish name of "Launceston", Lannstefan, means the "church of St Stephen" and is derived from the former monastery at St Stephen's a few miles north-west, while the castle and town were originally named Dunheved.

The earliest known Cornish mint was at Launceston (which is to say in St Stephen by Launceston). It operated on a minimal scale at the time of King Ethelred II. Only one specimen of a coin minted at St Stephen's is known to exist. In the reign of William I the mint was moved to Dunheved and remained in existence until the reign of Henry II, 1160.[2]

Launceston Castle, which dominates the town, is a Norman castle of motte-and-bailey design, and was built by Robert de Mortain, half-brother of King William I, around 1070 to dominate the surrounding area. Launceston was the capital of the Earldom of Cornwall until replaced by Lostwithiel in the 13th century. Launceston considered the county town of Cornwall until 1835 when Bodmin replaced it.

During the reign of Henry III, a mint was again established in Launceston.

During the English Civil War, Launceston was staunchly loyal to King Charles I, hence the borough's coat of arms and its motto Royale et Loyale. The Prince of Wales, later King Charles II, stayed in the town for a couple of days on his way to join the Royalist army based further west.

In 1643, the Parliamentarian forces under the command of Major General James Chudleigh advanced in an attempt to capture Launceston from the Royalists. The garrison commander, Sir Ralph Hopton, stationed his forces on the summit of Beacon Hill, a steep hill which overlooks the town. The Parliamentarians captured the foot of the hill, but were unable to dislodge the Royalist forces from the top. Hopton led a counterattack down the hill and, despite fierce fighting and the arrival of Parliamentary reinforcements, forced Chudleigh's troops to retreat.[3]

Sir Richard Grenville was committed by Prince Charles to Launceston Prison, for refusing to obey Lord Hopton: he had already quarrelled with General George Goring.[4]

Launceston remained the centre of the justices of Cornwall untl transportation links within the county improved.in the late 18th century. The county assizes moved to Bodmin in 1835.

In the early 19th century, Launceston gave its name to the settlement which is now the second largest city in Tasmania.

The outskirts of Launceston have recently undergone rapid large business development, although the town centre has slowly become less and less commercial, with only small shops and many of those going out of business within only a few months. On the edges of the town are two industrial estates at Pennygillam and Scarne. The employment of immigrants from Eastern Europe has allowed the town to sustain some of its primary industries, which the town might not otherwise have been able to support due to the low number of potential employees in the existing population.

The town has ten pubs and a large number of restaurants, cafés and takeaways. 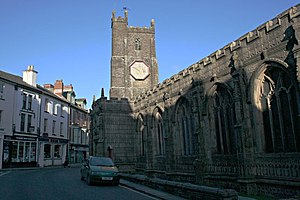 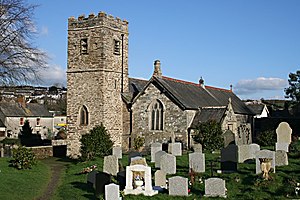 The fine Tudor church of St Mary Magdalene was built in 1511–1524 by Sir Henry Trecarrel as a memorial to his infant son who died whilst being bathed. The ornate carvings in granite originally carved for the mansion he began to build at Trecarrel, Lezant have withstood the test of time. The tower of the church dates from the 14th century, an earlier church and graveyard having previously occupied the site.

A modern Roman Catholic Church dedicated to Saint Cuthbert Mayne stands in the town, built in the Byzantine style and opened in 1911.[5]

There have been three Nonconformist chapels: Wesleyan Methodist, Bible Christian, and Calvinist.[6] 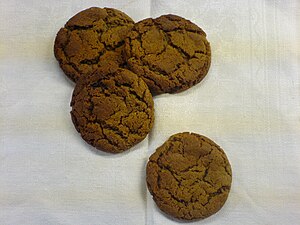 Before the Reformation it is frequently mentioned in the Launceston borough accounts that minstrels were hired to play for saint's day celebrations.

The poet Charles Causley was a native and long-standing resident of the town where he was both born and died. He was at one time contender for Poet Laureate and died in 2003, aged 86. He contributed the account of Launceston to a feature in the Sunday Times magazine called "Village England". He describes it as belonging to England rather than to Cornwall "[7] Launceston is one of the most important towns in Daphne du Maurier's novel Jamaica Inn.

Cornish fairings are a type of ginger biscuit commonly found in Cornwall. The recipe is reputed to have originated at the "maid hiring" fair, held the week after Christmas in Launceston.

Part of the town wall is still in existence including the South Gate of two arches. The White Hart Hotel incorporates a Norman doorway possibly removed from the Castle. New Bridge (early 16th century) crosses the River Tamar: it is of granite. Two old bridges cross the River Kensey: one mediæval and one built in 1580. The Baptist chapel is late 18th century and a number of Georgian houses may also be seen.[8]