Cotehele is a grand Tudor manor house with extensive landscaoped gardens running down to the River Tamar at the eastern edge of Cornwall, within the Parish of Calstock. It is now in the care of the National Trust.

The style of the house is a mixture of mediæval and Tudor and its probable origin is around 1300. The main phases of building appear to have been by Sir Richard Edgcumbe from 1485–89 and his son, Sir Piers Edgcumbe, from 1489-1520.[1]

This house is one of the least altered of the Tudor houses in the United Kingdom. The outbuildings include a stone dovecote in a remarkable state of preservation.[2] For centuries a home of the Edgcumbe family, the house and estate came into the hands of the National Trust in the twentieth century. The grounds stretch down to a quay on the River Tamar and Cotehele Quay, maintained as a museum to the days of trade. Morwellham Quay is a little upriver on the Devon side..

The gardens and parkland are listed as Grade II* on the Register of Parks and Gardens of Special Historic Interest in England[3] Tey are laid out in formally planted terraces running down the hill, with a variety of plants linked by ponds. The Valley Garden includes a mediæval stewpond and a dovecote, while the tranquil Upper Garden is more open and formal. The grounds also have two orchards planted with local apples and cherries.

The barn has been converted to serve as a vast dining room / restaurant.

Cotehele and terraces of its Italian garden

Cotehele Quay is at the bottom of the hill on the River Tamar. This was once a busy, working quay, the buildings and equipment standing yet to give an idea of the days when it was busy. Lime kilns on the quay and dotted along the riverbank recall one of the trades carried out here.

At the quay is the restored Tamar sailing barge 'Shamrock'. The Discovery Centre by the quay tells the story of the Tamar Valley. 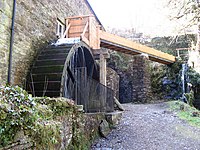 The National Trust Cotehele estate includes also Cotehele Mill, up the hill from the house. This is a working watermill with workshops attached. The mill is turned by the brook in the valley and is set over three storeys. Guides show the working of the mill and the flour is sold in the National Trust shop.

In its day, this was the mill providing the bread for the estate and locality and it retains something of the atmosphere.

Among the outbuildings there is a furniture maker and a potter, along with re-creations of wheelwright's, saddler's and blacksmith's workshops, which give demonstrations in season.